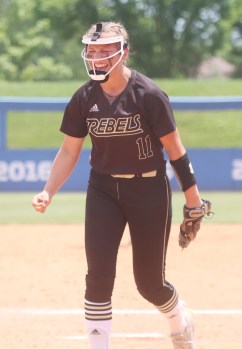 Boyle County pitcher Kayleigh White reacts after getting a strikeout to leave the bases loaded during the fifth inning Sunday. - Photo by Mike Marsee 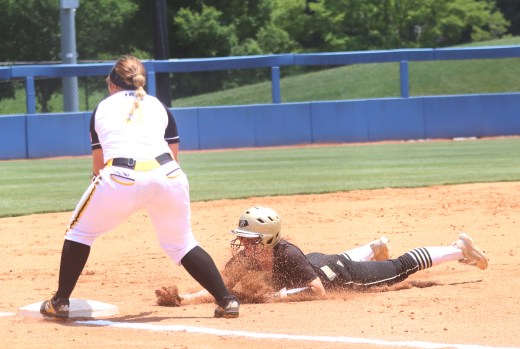 Hailey Cannon of Boyle County slides into third base after advancing on a throwing error following her steal of second base during the fifth inning Sunday. - Photo by Mike Marsee 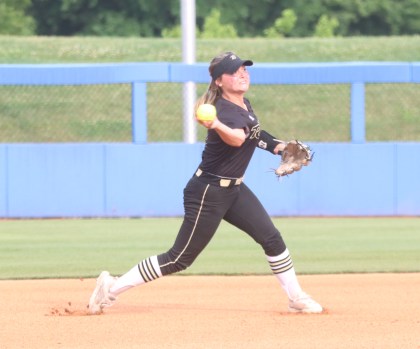 LEXINGTON — When the game that wouldn’t end finally did, Brian Deem figured he had earned a decent meal.

Boyle County was moving on in the KHSAA State Softball Tournament after defeating Johnson Central 1-0 on Sunday in a semi-state game that took more than 48 hours to complete.

The next game isn’t until Friday, so there’s plenty of time for planning and preparation and checking the weather forecast. But first, the Boyle coach was headed home to fire up the grill and reflect on the Rebels’ wild weekend.

“I’m not even worried about (Friday). I’m worried about getting home,” Deem said. “I think I might have a couple of ribeyes to grill tonight.”

Deem and his players had spent some six hours at John Cropp Stadium to complete a game that had been suspended two days earlier. The Rebels were within three outs of doing that when they were forced to wait out another rain delay of nearly four hours.

Then they were one hit away from losing their slim lead before they got the final out.

“Everybody made memories today on both sides of the field,” Deem said. “It was definitely something that was a test of wills, and I’m proud of the way my kids played.”

Boyle pitcher Kayleigh White, who took a perfect game into the fifth inning, escaped trouble in each of the last three innings.

Johnson Central left the bases loaded in the fifth inning and stranded two runners in the sixth, and the game ended with the tying run on second base.

“They had some runners on, and I knew if I just kept spinning the ball and hitting my spots we would be fine, just get a lot of swings and misses,” White said.

Boyle (28-6) advances to a quarterfinal against Lewis County on Friday. The game time will be announced after the semi-state round is completed Monday.

The Rebels took the long way to the round of eight. Their game took just 2 hours, 3 minutes to play, but it was 2 days, 2 hours, 45 minutes from start to finish.

The game began Friday afternoon almost two hours after the scheduled start time — thanks to another weather delay in the preceding game — but was delayed and ultimately suspended in the third inning when thunderstorms settled over Lexington.

“It was stressful,” White said. “We just wanted to get out here and play the game and find out who the winner was. Waiting two days, it was stressful.”

Deem tried to alleviate that stress by giving his players Saturday off.

“I wanted my kids to be kids and relax. That extra day of hitting isn’t going to make or break us, and we came back here today and were ready to play,” said Deem, who spent his Saturday watching his 10-year-old daughter play softball in Campbellsville.

When the Rebels reconvened Sunday afternoon, they were on the field for 1 hour, 11 minutes before the umpires halted play just as they were taking the field for the bottom of the seventh as a thunderstorm approached.

The teams made camp in the indoor facility adjacent to the stadium, killing time as best they could as they waited for the skies to clear.

“I just kept checking on them, making sure that we weren’t getting ourselves into a bad situation,” Deem said. “Our kids stayed awake. A couple of them dozed off.”

White said she was one of those who dozed.
“I took about a 30-minute nap,” she said. “We just sat around, just talked to each other, just relaxed. … We played cards, tossed the ball around.”

When the game resumed after a 3-hour, 49-minute delay, White and the Rebels needed only seven minutes and 15 pitches to finish off Johnson Central (33-7).

“They had had enough of game 1,” Deem said. “We were either going to … collect uniforms (Monday), or we were going to have our day off and come back (to practice) on Tuesday.”
The outcome was in question to the end. Johnson Central’s Madelyn Vaughn smacked a single to right field with two outs, and pinch-runner Claire Gamble moved to second on a wild pitch before White (13-2) finished the game with her 12th strikeout on her 114th pitch.
The Boyle sophomore found herself in two other jams after retiring the first 13 batters she faced.
In the fifth inning, a walk and a bunt single broke up her bid for a perfect game, and an intentional walk loaded the bases with two outs before a strikeout ended the inning.
“We were in a tight spot for sure,” Deem said. “I told Kayleigh today, ‘I want you to have the ball, go in there and be you, and you’ve got the defense behind you.’ And our defense made plays when we needed to.”
In the sixth, White gave up a pair of two-out singles, then got another strikeout. Six of her seven innings in the circle ended with strikeouts.
On the other side, Johnson Central pitcher Chloe VanHoose allowed seven hits and 11 strikeouts.
“It was an outstanding ballgame on both sides,” Deem said. “That’s a very good team over there, and Chloe VanHoose did an outstanding job in the circle.”
Boyle scored the game’s only run in the third inning Friday on an RBI single by Summer Ray. The Rebels left one runner on base in the fourth, fifth and sixth innings, left two runners on in the seventh and stranded eight in all.
“We were fortunate to get a big hit on Friday,” Deem said. “I felt like we could’ve got a couple of big hits today that could’ve put the game a little bit out of reach, but on the flip side they could’ve got a couple of big hits as well that could have given them the lead.”
Hailey Cannon went 3 for 4 at the plate and scored the Rebels’ only run, and Ray was 2 for 4.
Boyle, making its fourth consecutive state tournament appearance and its sixth in nine seasons, now looks ahead to Lewis (22-8), a first-time tourney participant that defeated Wolfe County 10-6 in a game completed Friday.
Lewis pitcher Emily Cole allowed nine hits and four walks against Wolfe, but she also struck out 10 batters in a 129-pitch outing.
Cole has thrown every pitch for the Lady Lions in the postseason, allowing five earned runs over 45 innings. She threw 192 pitches in a 12-inning win over Boyd County in the 16th Region semifinals and another 126 the next day in the championship game against Ashland Blazer.
“She throws a good offspeed, she’s real good at spotting the ball,” Deem said. “They’re in the elite eight for a reason. This isn’t a fluke. We know we’re going to have our hands full.”