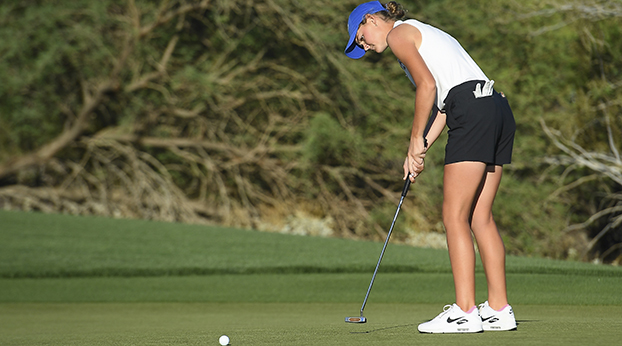 Golfer Laney Frye of Lexington, who made the SEC all-freshman team, always gives her putter a name. Her current putter is named after PGA star Ricky Fowler. (UK Athletics Photo)

Laney Frye became just the fourth UK women’s golfer to make the Southeastern Conference All-Freshman Team after her impressive season where she averaged 73.5 strokes per 18-hole round, the fifth-best average ever at UK.

Maybe her secret to success was naming her putter, an idea she got from her father.

“My dad always told me to give your putter some extra love and so did (PGA player) Brad Faxon and he’s a great putter,” Frye said.

“Mine is named Ricky after (PGA star) Ricky Fowler because he has the purest putting stroke.”

She’s had other names for her putter before but has had “Ricky” for about a year and a half now.

“He has his spurts but he is alright most of the time. I like him pretty well,” she said about her putter.

Frye says her UK teammates have also named their putters and they will ask each other how “Ricky” or the other putters are doing.

So has “Ricky” made her the best putter on the team?

“I don’t know. Putting can be so streaky,” Lane said. “Hopefully by the end of my four years (at UK) I can earn that title.”