Review of ‘Clue: On Stage’ at Pioneer Playhouse 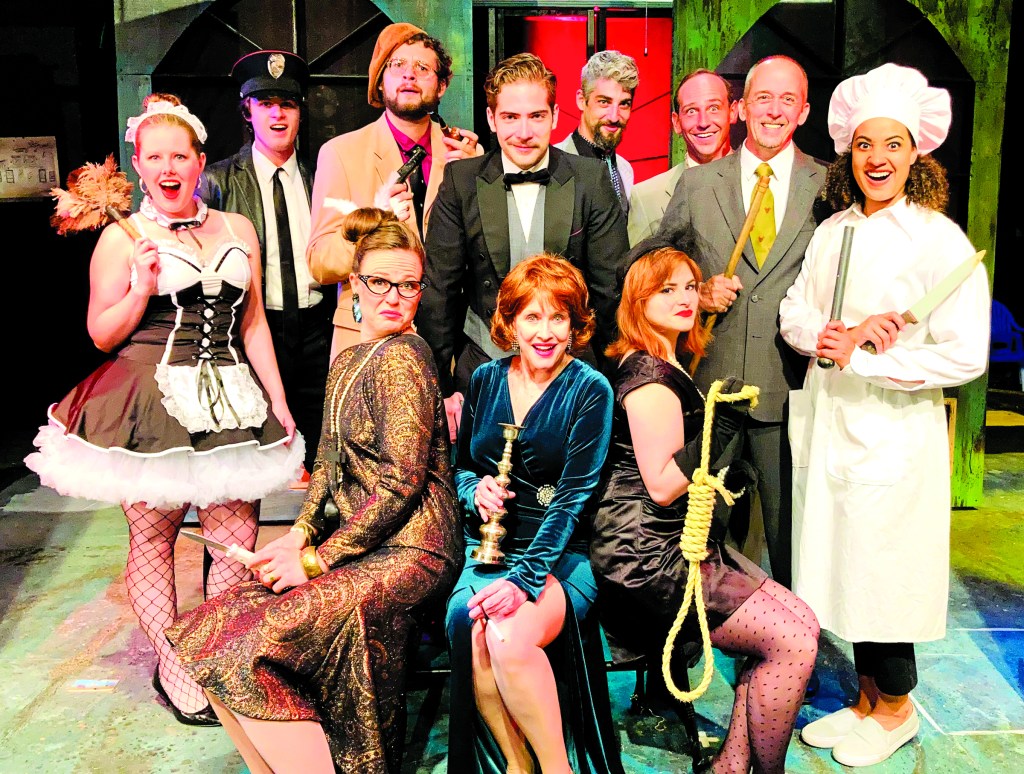 The full cast of “CLUE: On Stage” at Pioneer Playhouse. - Photo submitted

On opening night of “Clue: On Stage” at Pioneer Playhouse on June 11, many audience members toted umbrellas and rain jackets. It had rained most of the day but stopped by the time the play began. Heather Henson, managing director, said she was thankful for clear skies when she addressed the audience prior to the show.

After all, though “Clue” takes place during a dark and stormy night, that atmosphere is best kept onstage through sound effects and lighting rather than on an audience at an outdoor theater who wants to keep dry, and especially with COVID-19 precautions keeping the audience, which was at 50% capacity, from moving inside if it rained.

The set was thoughtfully designed by artistic director of Pioneer Playhouse and director of the show Robby Henson. In an interview with the Advocate-Messenger prior to the show, Robby had said the Playhouse was at first hesitant to pursue “Clue: On Stage” given the nature of its stage directions, which called for flying rooms and objects, something the Playhouse’s stage doesn’t have the ability to do.

However, Robby was determined to make the show work on the Playhouse stage and got creative in its execution — and stage directions changed accordingly — through the use of rotating and sliding doors and walls so actors and actresses could easily go in and out of “rooms” on stage. The audience would be able to follow along, seeing what was going on in the “rooms” as events occurred.

The set did indeed have the atmosphere of a creepy mansion, with “walls” that looked vaguely faded and dingy, ambiguous portrait paintings of people hung on them, and a series of rooms, including a library, lounge, and kitchen. Stage fog and lighting were used to create shadows behind doors and to set a mysterious mood.

The actors and actresses navigated the stage, with all its sliding and rotating parts, it came across as seamless, and the murdering character (or characters — we won’t tell!) certainly had no trouble performing their bloody deeds in the various rooms, with an assortment of weapons. Though at times it was somewhat difficult to follow in what rooms events were taking place, by the end of the play it was clear, though this writer is spilling no spoilers here.

For the comedic value of the show, as it’s a comedic murder mystery, techniques involving synchronization, exaggerated movements and speech, and repetition, came across as charming and well-done to this writer on the part of all of the actors and actresses.

Comedic lines and actions were delivered with a biting humor that fit the content nicely and cast the characters in their intended lights — for example, Professor Plum as narcissistic, butler Wadsworth as stuffy and formal with a less-than-upright past, Miss Scarlett as frank and sharp-tongued, Mrs. White as mysterious with a myriad of dead husbands, and Mrs. Peacock as haughty and self-righteous. The comedy could also be silly (in a good way) at times, as portrayed for example through the anxious, allergy-ridden (especially in the presence of cats) character Mr. Green.

And with characters such as the cook, played by Brittany Voll (who also plays the motorist and “telegram girl”), and the maid Yvette, played by Ashley Rose Jones, who had smaller roles, they had the charisma and presence of main characters and often drew the eye with their antics and facial expressions.

“Clue: On Stage” is showing until July 3 Tuesdays through Saturdays, with dinner starting at 7 p.m. and the show at 8:30 p.m.

Learn about this show and this season at Pioneer Playhouse and buy tickets at pioneerplayhouse.com