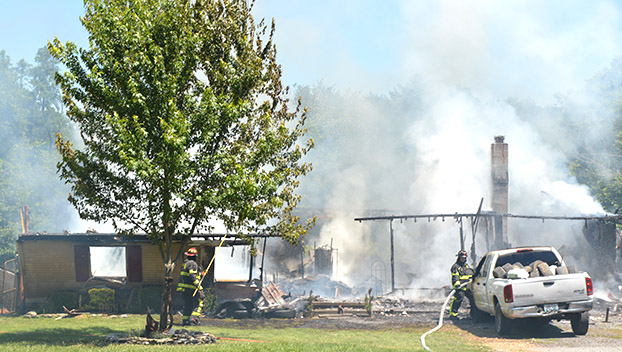 A structure fire was reported at a house at 431 Yates Road in Junction City Wednesday morning. The Boyle County Fire Department responded.

No injuries were reported.

Assistant Fire Chief Tony Broyles said there was a “total loss” of the house, and that nothing was salvaged. 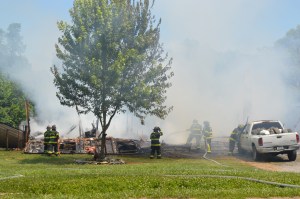 The home is pictured after the front outer wall was pulled down. The Boyle County Fire Department responded to the house fire. – Photo by Olivia Mohr

As of Thursday afternoon, Broyles said one man lived in the house as the only occupant, and his parents owned the house. Broyles said the department did not know for sure how the fire started as the investigation is still ongoing, but the occupant had been having electrical issues, which he said the department thinks caused the fire. He said it would be difficult to trace the wiring with as burnt up as everything was.

Broyles said when the occupant had gone into the house after noticing smoke, the occupant first saw fire in the back bedroom of the house.

There were no pets involved. In fact, the occupant’s dog had just moved in with a neighbor across the street, Broyles said.

On Wednesday as firefighters were putting out the fire, smoke was visible from a couple of miles away, and the fire department worked to tear down any walls that had not already collapsed as they hosed down the fire and smoldering smoke.

In the response to the fire, Broyles said the nearest fire hydrant was about two or three miles away in Junction City, so the department had to deliver water from the hydrant to the house. The three tankers delivering water had to each make about three trips to the hydrant to put out the fire.