Booker may be best former UK player in NBA today 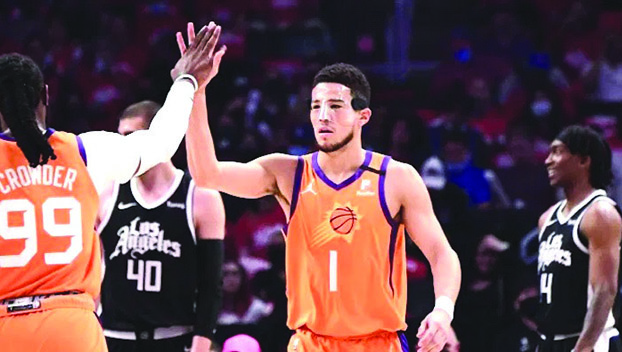 Devin Booker put himself in elite company with his triple-double in the first game of the Western Conference Finals.

If Devin Booker is not the best former University of Kentucky player in the NBA right now, he certainly has to be close. And he put himself in elite company with his game one performance in the Western Conference Finals when he had 40 points, 13 rebounds, and 11 assists — his first ever triple-double — in a 120-114 win over the Los Angeles Clippers.

Only NBA superstars LeBron James, Larry Bird and Bill Russell have ever led a team in points, rebounds and assists in a conference/division finals game before Booker did it.

Booker has never been one to brag on his play and took the same humble attitude when asked where that game ranked among the big moments in his career.

“That’s for everybody else to rank performances and such. I’m just out there trying to do my job and that’s to win basketball games at all costs,” Booker said.

Booker said his “old-school game” comes from growing up in Grand Rapids, Mich., and then moving to Moss Point, Miss. He said that made him figure out two different cultures and why people act the way they do.

He’s also that rare player who can still score effectively with a mid-range shot.

“That’s pretty much been my game my whole life. I never shied away from it and I never have not took those shots,” he said. “I feel that’s what a lot of defenses give up, living by the so-called analytics. But if you put your work in and you shoot those shots at a high clip, that’s tough for a defense to guard because that’s what they have been giving up all season.

Booker has needed his entire offensive package in the Western Conference Finals. In the first four games of the series, Booker was only 5-for-22 from 3-point range but still managed to score 100 points (he was 29 of 31 at the foul line).