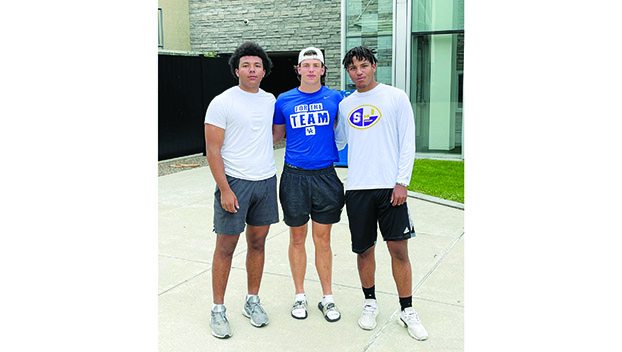 Loss of football star brothers a blow to Somerset

Losing two players who both have 10 Power 5 scholarship offers would be a blow to any high school football program but Somerset coach Robbie Lucas wishes nothing but the best for twin brothers Jacob and Jerod Smith as they head off to Loomis Chaffee School in Connecticut.

“They both have the body of a man,” Lucas said. “They are young kids who have a world of potential. Athletically, get them in front of you and you can tell they can move. They have a great combination of skill and size. Coaches see their size and athleticism and love it. They played two years for us but are going to redo the sophomore year, so coaches love what lies ahead for them.”

Lucas thinks if they do stay in high school three more years they will “present problems” for a lot of teams. Jacob Smith is a 6-4 1/2, 227-pound defensive end/tight end. His brother, Jerod, is a 6-3, 250-pound pound linebacker-defensive end-running back.

Both have been early morning weight room regulars for workouts with Somerset assistant coach Kevin Sheron, the father of UK freshman quarterback Kiaya Sheron and their former high school teammate.

“They very rarely missed a workout,” Jeff Sheron said. “They really get after it in the weight room and the extra year in high school will be really beneficial to them because they both know they have a lot of work still to do.”

Lucas said as much as he would like to have had them continue playing for him, he has no ill feelings about the move to the private school.

“We will miss them. They are really good kids but they have just decided to go a different way,” the Somerset coach said. “They are kids that can flat play. We wish them well. They will always be mine and Somerset players.”

Softball, baseball, track athletes honored SOFTBALL Hailey Cannon of Boyle County has been named the Class 2A Co-Player of the... read more