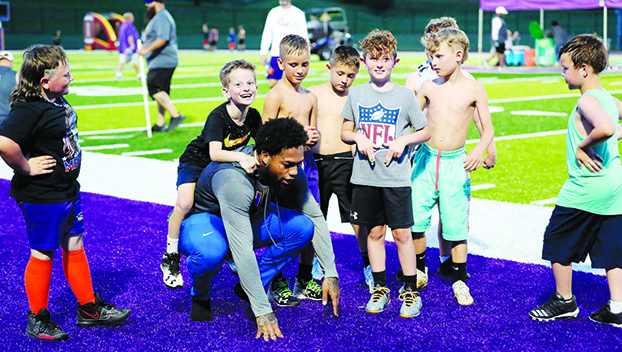 He wandered around the Somerset High School football field interacting with youngsters in various ways and smiling and laughing almost constantly.

Former University of Kentucky football star Lynn Bowden felt right at home in Somerset, the reason he came back for a second straight year to do a camp for the Somerset Youth Football League.

“It means a lot for me to be here. I wish I had opportunities like this as a young kid,” Bowden said. “I know them seeing me out here … I was once them. It just means everything to me.

“I wanted to bring my son but I had a couple of things I had to do before and I knew he was going to be running me crazy. So next time when I come back, I will bring him.”

Come back? Kerri Brooks said Bowden, who now plays for the Miami Dolphins, told league officials he “was up” for making it a yearly camp.

“I think he just sees himself in some of the kids and truly enjoys giving back. I was amazed at his personality when I met him last year. He far exceeded our expectations,” Brooks said.

This was Bowden’s only camp this summer — “I am focusing on bettering myself this offseason,” Bowden said —  even though he hopes to have one also next summer in Youngstown, Ohio, his hometown.

“I was here last year and feel like I am home here just like I feel at home in Lexington,” Bowden said.  “It is fun. It means a lot to me. I was once one of those young guys that didn’t have nothing coming up. Just being able to do this now that I got stuff means a lot to me.”

Bowden was even in Somerset the day before the camp to support a COVID vaccination clinic. He is fully vaccinated and wanted to encourage others to do the same.

He was just as encouraging with the campers as he was in constant motion finding a way to work with or talk to as many of the 115 campers — and camp volunteers — as he could. It might have been running a drill, taking part in a 7-on-7 game or seeing if he could throw a ball into a target. He did it all and that’s why he’s ready for his young son to get going.

“I started about his age. It’s about time for him to get out and get after it like I did,” Bowden said.

Bowden was a four-star recruit out of Youngstown, Ohio, who had offers from Michigan State, Michigan, Nebraska, Wisconsin and even Ohio State. He was the sixth leading rusher in Ohio high school history with 7,387 yards and 10th with 91 rushing touchdowns. He was also an all-state basketball player who averaged 24 points, six rebounds and seven assists per game his senior season.

At Kentucky he had 67 catches for 745 yards and five scores his sophomore season, returned two punts for touchdowns and ran back 27 kickoffs for 539 yards when UK went 10-3. However, he created his legacy his junior season when he moved to quarterback after four games. He had a SEC record 284 rushing yards and four touchdowns against Louisville and finished the regular season with 1,235 rushing yards and 11 scores. He also had 330 yards passing, 200 kickoff return yards and 30 receptions for 584 yards.

He threw the game-winning touchdown pass to Josh Ali in the Belk Bowl to end UK’s season and his collegiate career. Bowden also won the 2019 Paul Hornung Award given to the nation’s most versatile player.

He’s proud he joined players like Josh Allen, Benny Snell, Lonnie Johnson, Jamin Davis and others to change the direction of the UK football program.

“Now recruits look at Kentucky like it is a top school where they can go and succeed because they see other guys who have succeeded,” Bowden said. “I spent a couple of hours with the coaches and team before I came here. They are hard working young men. They have a lot of potential and I know they are going to succeed this year.

Bowden was the 80th overall pick in the 2020 NFL draft by the Las Vegas Raiders in the third round only to be traded to Miami just a few weeks into the season. He got his first extended playing time late in the season and had four catches for 41 yards against Cincinnati before making seven catches for 82 yards the next week against Kansas City.

Bowden would not share thoughts on his expectations for his second NFL season.

“I kind of got in trouble for talking about it, so I will just let it play out and see what happens,” Bowden said.

But he talked plenty to the campers. It was almost non-stop chatter from a player who did not always say a lot during his UK career. He said the camp let him show his personality.

“Just shows me outside of my shell. I have spent most of my life in my shell. I like to be out and about, so I am here,” Bowden said.

So talking to youngsters in kindergarten through sixth grade was more fun than an interview with 20 or more media members?

“That is like being interrogated. This was fun,” Bowden said.

Booker may be best former UK player in NBA…