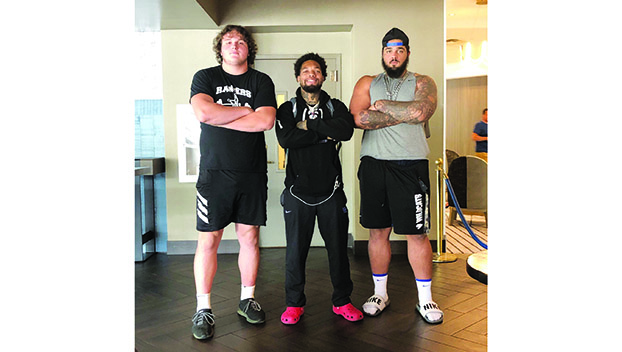 Ryan Baer, left, with Lynn Bowden and Darian Kinnard during his visit to UK.

Kentucky football fans made a big impression on 6-7, 330-pound Ohio offensive lineman Ryan Baer when he made his official visit to Kentucky last week.

He loved the passion of Kentucky fans reacting on social media to his visit.

“It was just exploding from me visiting. I really got a great deal of fan love,” Baer said. “I posted my picture (on Twitter) from my Ohio State when I visited. Ohio State is a big-time program with a huge social media following. But Kentucky fans came and blew Ohio State out of the water.”

Kentucky rolled out the Big Blue carpet for Baer and his family. He is ranked as the nation’s 366th best player by 247Sports and a top 40 offensive tackle nationally.

He got to meet UK All-American tackle Darian Kinnard during his visit. Kentucky commit Kiyaunta Goodwin, another four-star offensive lineman, also happened to be at UK. So did former UK star Lynn Bowden, who is now with the Miami Dolphins.

Baer’s father posted a photo of his son with Kinnard and Bowden as well as one of him with Goodwin, coach Mark Stoops and offensive line coach Eric Wolford.

“I really didn’t expect those photos to blow up (on Twitter) as much as they did,” Baer. “I think fans seeing me with two Kentucky legends (Bowden and Kinnard) made fans see it pretty much as Kentucky trying to put on a show for me.”

He knew about Kinnard because he finished his high school career in Ohio only about 20 minutes from Eastlake, Ohio, where Baer plays for North High School.

“I am a big Hudl film watcher. He was recommended as a guy to watch. Pro Football Focus had him as one of the top tackles in the country,” Baer said.

“I knew about Bowden from the year when he had to play quarterback (after moving from receiver). I knew a little about him from high school because our high school coach had played Bowden when he was a sophomore and said he was the best high school player he had ever seen play.”

He didn’t get to spend a lot of time with Goodwin, who stopped in Lexington after making an unofficial visit to Michigan State.

“By the time he got there I was leaving to hang with my player host,” Baer said. “I did talk to his trainer (Chris Vaughn).”

“They are trying to put together the greatest offensive line class in school history this year,” Baer said.

Baer visited Michigan State after leaving UK and then cancelled his scheduled official visit to Notre Dame. He has narrowed his college choices to Pittsburgh, Illinois, Virginia, Michigan State and Kentucky.

“He took a picture of me. I don’t know if he sent it to the O-line coach or not but he called me back two hours later and said I had an offer,” Baer said.

He never got a chance to talk with offensive line coach John Schlarman before his death in November but said the first day new line coach Eric Wolford was officially on the job, the coach called him.

“He let me know I was still a priority for Kentucky,” Baer said. “One thing I am looking for is a school that really shows interest in me.”

There is a lot to like about Baer. He can bench press 425 pounds and squat 540 pounds.

“Coaches like my size and the way I can move,” Baer said. “I am not just a big dude who just lays on people. I am aggressive. My school is a run-first team, so I am a road grader of sorts.”

He knows he will need to become a proficient pass blocker to play in the NFL, so he’s already doing that.

“I haven’t been able to practice pass blocking much where we run the ball so much. I have got a couple of trainers I work with, so I am getting comfortable with pass protection and know I will get better when I get to college,” Baer said.

SEC Defensive Player of the Year Gabby Curry will throw out the first pitch at the Cincinnati Reds game June... read more