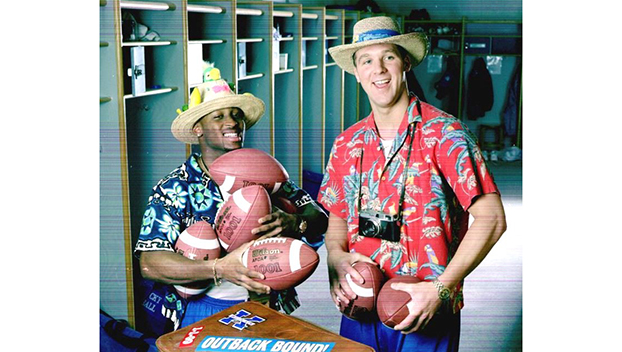 When Kentucky hired Liam Coen as its new offensive coordinator, he admitted that one player he watched play when he was growing up was Kentucky quarterback Tim Couch, the No. 1 pick in the 1999 NFL draft.

“I thought that was great. I had no idea he grew up a Kentucky football fan or a fan of me and tried to wear his jersey like I did,” Couch said. “It’s really cool to see how (the offense) has grown and people have taken it in different directions. It’s just phenomenal.”

Couch joked that Mississippi State coach Mike Leach, his offensive coordinator at UK, probably runs the same system and calls the same plays as he did working for Hal Mumme at Kentucky.”

Couch had a record-setting career at Kentucky — 8,435 yards passing and 74 touchdowns — just like he did in high school at Leslie County — 872 completions for 12,104 yards and 133 touchdowns, all national records.

The former UK quarterback said it was not easy to choose whether he missed high school or college football more.

“In high school, it is pretty special because you are playing with guys you grew up with your whole life,” Couch said. “That is a pretty special thing to get to play every Friday night with your best buddies.

“In college you are meeting guys you have never seen. You come together and make a team. College is pretty special because of that. That’s why it is hard to say which I miss most. The college game is so much fun.

“We were lucky that Hal and Leach had the perfect fit for us all offensively. Even now people are still running the Air Raid. It was cool to be part of that from the start.”

Couch is again a finalist on the College Football Hall of Fame ballot and also understands how difficult it is to be selected for induction.

“Just to be a finalist is an honor,” Couch said. “Certainly I feel like I have the numbers to be in. I hope they put me in before I die because it’s the highest you can get.”

Dennis Johnson, a former all-SEC defensive end at Kentucky, does not understand why Couch is not already in the Hall of Fame.

“He is a no-brainer. There was nobody better,” Johnson said. “He was able to distribute the ball. He brought excitement not only to Kentucky but around the country. He played in the best conference and was able to elevate the Air Raid to national prominence.”

Anthony White was part of that prolific offense Couch directed. Like Johnson, he sees no reason for Couch not to be a Hall of Famer.

“I don’t know what more he could do to be in the Hall of Fame,” White said.