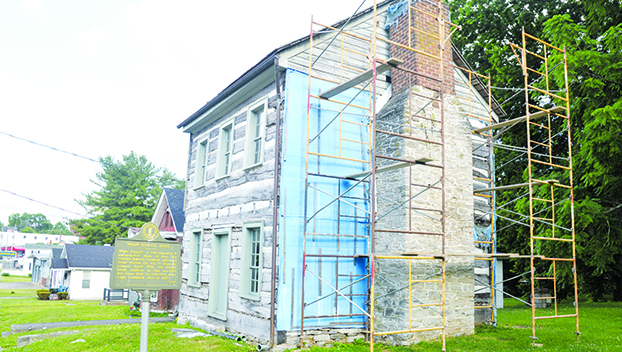 The Willis Russell House is located at 202 E. Walnut Street in Danville. The Danville City Commission has unanimously approved that an ordinance be drafted rezoning the property from two-family residential to central business. - Photo by Olivia Mohr

House may be renovated for occasional residence and public visits

The structure known as the Willis Russell Memorial House may see future renovation and use for residence and public visits.

The Danville City Commission unanimously approved a recommendation from the Danville-Boyle County Planning and Zoning Commission on June 28 to rezone approximately 0.3 acres at 202 E. Walnut Street, where the house is located, from two-family residential to central business. When the P&Z board held a public hearing June 23 in regards to the property, their vote was a unanimous eight votes to recommend the city approve the zone change.

The next step will be for the city to draft an ordinance for the zone change, which will require two readings.

Planning and Zoning Director Steve Hunter presented the P&Z board staff report on the property to the commissioners.

In the report are the narrative and development conditions the applicants, Karl McMillian and Beckham Ruff of Aiken, South Carolina, submitted as part of their zone change request. They co-drafted the conditions with the property owner, Boyle Landmark Trust, Hunter said.

Their narrative reads that they are “both architecture, design and preservation enthusiasts and have been … involved in the restoration of historic properties in both Charleston, South Carolina and Denver, Colorado.”

The applicants stated in their narrative in the report that their intention is to restore the exterior of the house “in the same manner as the log structures in Danville’s Constitution Square — maintaining the integrity of the logs, chimney and windows as well as the original style of chinking.”

According to their narrative, the applicants “have not drawn a conceptual development plan,” and “The footprint is not changing and there are no plans at this time to add any additional structures to the property.”

As for the interior of the house, the applicants want to “preserve the history and charm of the walls, floors and woodwork while making the home suitable for today’s style of living.” They want to use the house for their “own personal enjoyment” and visit a few times a year while their son is a student at Centre College and use it as a short-term rental property when they’re not at the home.

Hunter said the historical house has restrictive covenants on it through the U.S. Department of the Interior and the Kentucky Heritage Council — the house is on the National Register of Historic Places under the formal name of “Thomas Barbee House” — and in the real estate sale of the property those covenants would pass along to the new property owner. So one thing that needs to happen is that the house needs to be open to the public on an occasional basis, Hunter explained.

“Several times in the year, it would have to be open to the public, so that’s really the need to go to the central business zoning district, which gives them the flexibility to use it as a residence or have that kind of public museum project that’s got to happen here,” he said.

The five development conditions in the staff report are, in summary:

• “The applicant agrees to provide no more than 50% total lot coverage throughout the property.”

• The applicant agrees the building area will not exceed 5,000 square feet, and no building will exceed two stories tall.

• The applicant agrees “to one free-standing monument sign on the site,” which will not exceed 10 feet or a total area of 64 square feet, and the sign cannot be “internally luminated.”

• The applicant agrees to not use the property for the following purposes: “an auto showroom or dealer (new or used), day care facility, hospital, outpatient surgery center or urgent clinic, nursing home or assisted living, drive-thru restaurant.”

• The applicant agrees and future utilities will be placed underground.

There were no staff items of concern in the staff report, and the proposal was found consistent with the Future Land Use Map and goals and objectives, and the current zoning designation of two-family residential was deemed inappropriate.

When the city commission was making their decision, City Commissioner Kevin Caudill said, “To me, it’s kind of a win-win. I mean, that’s a great building, and I think, sometimes, if we can adapt them, it tends to extend their life, and I think that’s a good thing.”

City Commissioner James “J.H.” Atkins said, “I’m just excited about it because we’ve been concerned about losing it in our community. This is definitely going to save it, make it usable for hopefully a long time.”

Historical significance of the property

According to signage outside of the structure locally known as the Willis Russell Memorial House, Willis Russell was “a well-educated and emancipated slave” of Revolutionary War captain Robert Craddock. Russell relocated from Warren County to Danville around April 1838, and he taught Black children in the “pre-1795 log home that he inherited” after Craddock died in 1837. According to previous Advocate-Messenger reporting from July 2019, however, the house “may have … been built by Thomas Barbee in the 1790s,” and deed research revealed Russell never owned the property, “which casts doubt on whether he taught school in that particular building.” The house complements the nearby log structures in Constitution Square Historic Site, as it is from around the same time period.