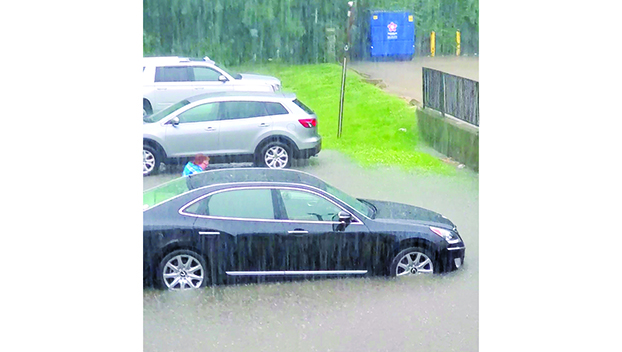 A client at Changez Design Team wades through water that has flooded the parking lot of the hair salon during a heavy rain last week. -Photo submitted

Nearly five years after her downtown business flooded, and four years since she sued the city because of recurring flooding, alleging the city created drainage problems and has failed to fix the situation, Cathy Lynch is still waiting for a solution to her problem.

After heavy rainfall drenched the area last week on July 1, Lynch said she once again had to spend time and money cleaning up her property after flooding at Changez Design Team located at 129 East Main Street — right next door to Domino’s and Dollar General Store. 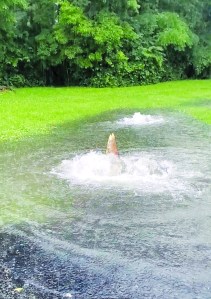 It appears as though there are two water fountains in the back of the lot where Changez Design Team hair salon on East Main Street is located, when it rained heavily last week. -Photo submitted

In a letter written to The Advocate-Messenger, Lynch wrote, “It will be five years since my devastating flood. I never had problems before Danville approved the new development next to me without giving groundwater or rain water runoff consideration. Danville made it worse by storm drains being wrong.”

She said, “I have been at this location for 21 years.” And six years prior to moving there, her hair salon was located just across the street next to the Valero’s log cabin convenience store and gas station where the post office is now.

“This end of town never flooded before the development of Dollar General Store, Domino’s, Farmers National Bank and the post office.”

Lynch added, “Danville city storm drainage is grossly inadequate. It allowed me to be the low point and added storm drains made to act like a release valve backing up in my property like a pressure cooker. The water can’t go through the drainage pipes but goes out in my yard, which is designed to flood when it rains heavy.”

Lynch said, “I don’t want to sound like a ‘Debbie Downer’. But it’s just frustrating and aggravating. But on the other hand, I love Danville and am proud to call it my hometown.”

She said last week’s flooding wasn’t nearly as bad as when it happened in 2016, but she still had to spend time and money to clean up her property. “I had to stop working one day and take care of issues the next to deal with the flooding.”

Lynch said she wants the city to fix the drainage system and put in property size pipes “to cut down future damage.”

“I feel like I’ve been overlooked. Or they hoped I’d do nothing or run out of money. I felt they were not concerned about me, my family, my livelihood or my staff and clients. I also felt I was not as important as other business owners or people who have influence.”

Lynch said, “I had good faith when they originally told me they would look into this and fix the problem. … I feel like they’re in the wrong but don’t want to take the time or money to fix the problem for a small, independent business owner like myself.”

According to the extensive case file from the past four years, several motions have been filed.

The more recent ones include:

• On Jan. 22, 2021, Danville filed a motion to compel Lynch “to provide their expert report and for an award of fees and costs associated with this motion. … Plaintiffs have had more than three years to produce their experts’ reports and related information requested in written discovery. They have failed to do so.”

In summary, the motion asked for Lynch’s expert written reports within 30 days; produce experts for a deposition within 90 days; and pay for the city’s attorneys’ fees and costs “associated with” this motion.

• On April 6, 2021, Judge Darren Peckler wrote that based on hearing the city’s argument on March 3, Lynch’s attorney was ordered to provide her expert’s reports and make them available for deposition.

He also denied the city’s request for attorneys’ fees.

• On June 10, 2021, attorneys for both Lynch and the City of Danville agreed to the judge’s order that “When the parties are ready to schedule the pretrial conference, either may file a motion” to set the date for it.

Lynch is represented by local attorney William R. Erwin. Danville and Kentucky League of Cities, which are both named as defendants in the lawsuit, are represented by Todd Osterloh.

This story was updated at 3:18 p.m. on Wednesday, July 8. The story was originally published July 6.  A man... read more