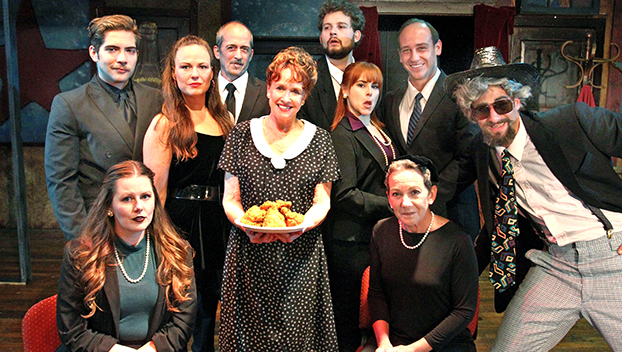 The first thing I noticed about “Southern Fried Funeral” at Pioneer Playhouse in attendance on July 7 was the set. The play takes place entirely in the character Dorothy Frye’s house, specifically her kitchen, which to me seemed a perfect set for such a play. Kitchens are where all Southern fried food gets made, and they’re also where many intense family discussions take place, which “Southern Fried Funeral” is not short of.

The warm, rustic colors of the kitchen cabinets, as well as the addition of dishes and appliances akin to what audience members would find in their own kitchens added to the family atmosphere on set.

In a press release leading up to the opening night of the play on July 6, managing director of Pioneer Playhouse Heather Henson said, “Southern Fried Funeral is perfect for our audiences. It has outrageously funny moments, but it’s also full of heart and soul with characters everybody can recognize and identify with.”

The play has diverse, colorful characters, so there’s at least one you’ll resonate with. I found myself particularly drawn in by the portrayal of sibling dynamics, especially between the sisters Sammy-Jo and Harlene, played by the excellent Jessa DeLuca and Erika Lee Sengstack, respectively.

DeLuca nailed her onstage Southern accent and the role of intense, argumentative younger sister, and Sengstack was at first almost unrecognizable in her role of Harlene since it was so different from her role of Mrs. Peacock in “Clue: On Stage.” That’s a good thing — she was thoroughly convincing in both, polar-opposite roles. In “Southern Fried Funeral,” she played the rebel of the family who had gone to Dallas, Texas, in search of herself, returning to Mississipi for her father Dewey’s funeral.

The youngest of Dorothy’s children is Dewey, Jr. (played by Adian Chapman), who is essentially just a large baby living at home with his mother, not allowed to operate a blender by himself. He is into creature comforts like TV, breakfast cereal, disheveled hair and Darth Vader costumes, and he is captivated with winning the lottery. Chapman went all into this role, his tall stature making his character all the more amusing.

Patricia Hammond played Dorothy and convinced me the role was made for her. She played a Southern mother with a sharp tongue but a lot of sweetness. Hammond’s comedic delivery was natural and never forced, as were her character’s private meditations on grief, like when she gave a monologue addressing her late husband.

Dorothy’s brother-in-law, Dub, played by Daniel Hall Kuhn, is often described as a snake in the grass, and for good reason. Kuhn sold this sleazy character, and his ever-present toothpick and slow, lazy body language onstage were a nice touch that added to the role.

Characters that aren’t part of the immediate, main family members all had their ways of stealing the show, as the whole cast was delightful — this included Giancarlo Herrera as Atticus, Silas Waugh as Beachum, Eric Hedland as Benny Charles, Ashley Rose Jones as Ozella Meeks and Jan Sheffield as Fairy June.

The play’s director is Jennifer Goff.

“Southern Fried Funeral” is playing until July 24, Tuesdays through Saturdays, with dinner starting at 7 p.m. and the show at 8:30 p.m. Learn more about this show and this season at Pioneer Playhouse and buy tickets at pioneerplayhouse.com

Senator Rick Girdler recognized as a 2021 partner for…