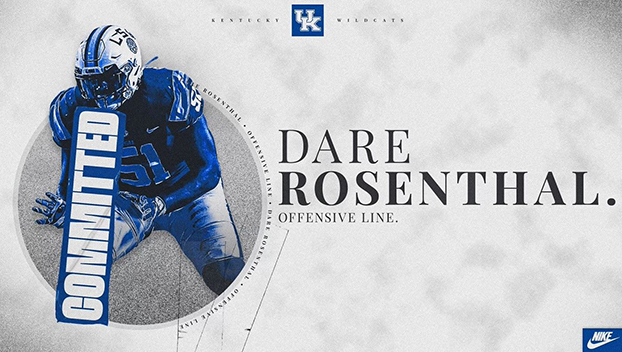 Former LSU offensive tackle Za’Darius “Dare” Rosenthal has signed to play football at the University of Kentucky, head coach Mark Stoops announced Friday. He will be eligible immediately and will have three seasons left to play.

“We are excited to welcome Dare to our team,” head coach Mark Stoops said. “He has SEC experience and is a tremendous talent. He will be a great addition to the Big Blue Wall.”

Rosenthal, a 6-foot-7, 327-pounder from Ferriday, Louisiana, played in 13 career games with eight career starts for the Tigers.

In 2020, he played in seven of the LSU’s 10 SEC-only games with five starting assignments vs. Mississippi State, Missouri, Alabama, Florida and Ole Miss.

As a redshirt freshman in 2019, he appeared in five games with three starting nods, helping the Tigers go undefeated at 15-0 and win the CFP National Championship. He started at left guard in wins over Northwestern State, Utah State and Mississippi State and played a total of 229 snaps with career-high 92 snaps coming against Utah State. In the three games Rosenthal started, the Tigers outscored their opponents 143-33.

Rosenthal, who originally signed as a defensive lineman but shifted to the offensive line as a freshman, redshirted in 2018.

Coming out of high school, Rosenthal was the top-rated defensive tackle prospect in Louisiana and the nation’s No. 18 overall defensive tackle. The consensus four-star recruit helped lead his team to the semifinals of the 2A state playoffs as a senior in 2017, while also playing on the offensive line for head coach Stanley Smith at Ferriday High School.

His senior season totals were eye-popping as he charted 60 tackles, 30 tackles for loss, six sacks, five quarterback hurries, recovered four fumbles (two for TDs), blocked a field goal and registered an interception. He also participated in the New Orleans Regional for The Opening in both 2016 and 2017 and was a first-team All-State selection for Class 2A by the Louisiana Football Coaches Association as a senior.

Seven home games at Kroger Field highlight Kentucky’s 2021 football schedule. The Wildcats kick off the season on Sept. 4 against the ULM Warhawks, the first of three consecutive home games. Missouri arrives in Lexington on Sept. 11 for the first conference game of the year before Chattanooga wraps up the homestand on Sept. 18.