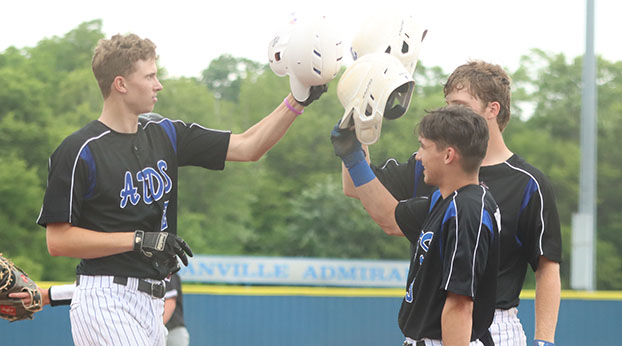 Christian Howe, left, of Danville is greeted by teammates Sunday following his solo home run during the second inning of the Admirals’ 8-0 victory over Pulaski County. Howe homered twice, giving him 20 on the season. - Photo by Mike Marsee

Christian Howe of the Danville baseball team has been named the MaxPreps Small School National Player of the Year.

Howe led the nation in home runs this season with 21, becoming the fifth high school player in the past 10 years to hit 20 or more in one season. He also led the nation in RBIs with 81 and hit .547 with 14 doubles and 51 runs.

Ethan Wood of Danville was named to the MaxPreps Small School All-America Team along with Howe.

The two seniors were the leading hitters on a record-setting Danville team that finished the season with 86 home runs, the third-highest total in Kentucky high school history, and the highest total nationally in more than a decade.

The Admirals finished 40-4, tying for the second-highest win total in the Kentucky record book and reaching the semifinals of the state tournament.