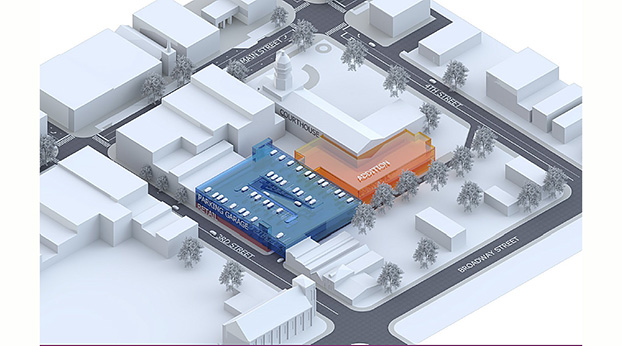 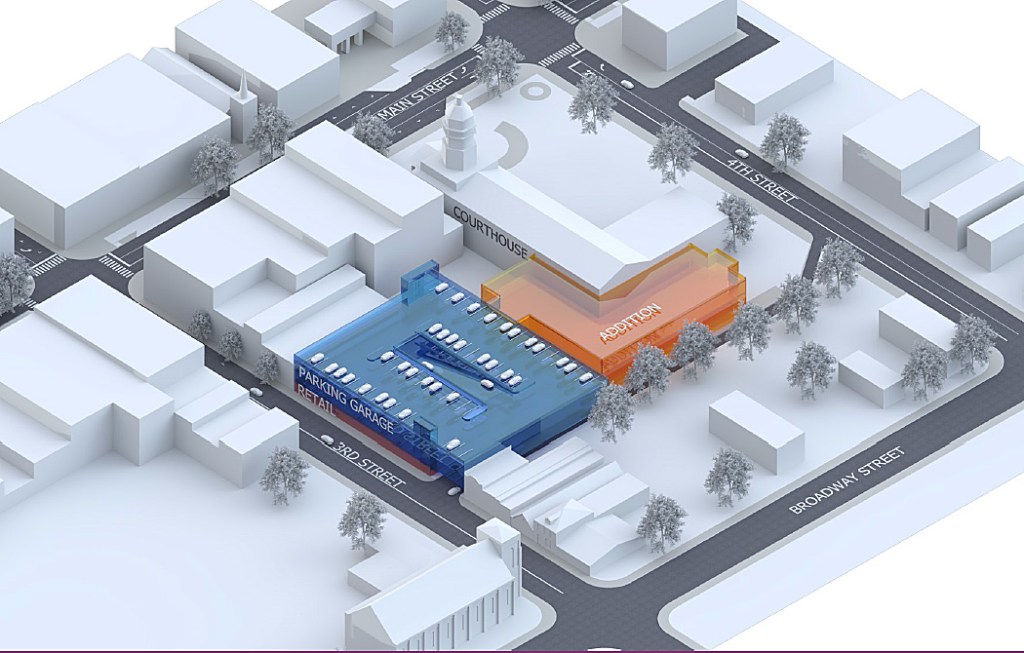 An expansion of the Boyle County Courthouse and construction of an adjacent parking garage with first-floor retail space is being pursued by city and county governments collaborating on the project, which is also part of the city’s downtown master plan.

In a joint meeting of the Danville City Commission and Boyle County Fiscal Court Thursday morning to discuss the courthouse expansion and the creation of an Economic Development Authority, City Manager Earl Coffey said designers of the city’s recently released master plan addressed the needs for the existing courthouse to expand and for more parking to be added.

According to the master plan that Coffey presented, “One option … is to develop existing city and county-owned land now used for surface parking. This option shows it is possible to add a 40,000 square-foot addition to the historic courthouse structure, while also providing decked parking for over 200 cars – a net increase of over 100 cars.”

Coffey said, “When court is in session, downtown parking is a disaster.”

He explained there have been “various conversations about the courthouse for years.” But the Administrative Office of the Courts, which leases space from the county, quit talking about expanding the courthouse because the city owned the “bulk of the Third Street lot” where the courthouse would need to spread out onto.

Coffey said the proposed parking garage, which would face Third Street where the city now has a parking lot, could be developed in conjunction with the county for not only courthouse employees, staff and those who are doing court business, but would also have space for other businesses to lease as well. And, a first-floor retail space could provide more commercial opportunities for new businesses.

According to the master plan, “The new structure could provide up to 8,000 square feet of street-level space for restaurants, shops, or county services. The attractive new aesthetic would likely trigger even more street-level business activity on Third.”

Coffey said the city wants to support the fiscal court in its expansion project by forming a joint panel to meet with the local judges to get their opinions and support for the project, and meet with the AOC in Frankfort “and see what happens.”

Coffey said the AOC has a budget and a capital program that the state government has allocated to it. “So you’re asking them to spend their capital in Lawrenceburg or here or wherever.”

He added, “Danville/Boyle County is one of the last courthouses in the region … we’ve had little AOC invested in the courthouse over the last 20 years… It’s time for AOC to invest in Danville, and invest in that courthouse and at that location. … It should be our turn.”

Coffey also said he has already met with Rep. Daniel Elliott about the project and shown him the master plan. “Elliott is well aware of it.”

After less than 30 minutes of presenting an overview of the city’s downtown master plan and how it specifically affects the Boyle County Courthouse property, the magistrates agreed with Hunt and were ready to go forward and set up a meeting with the AOC for August.