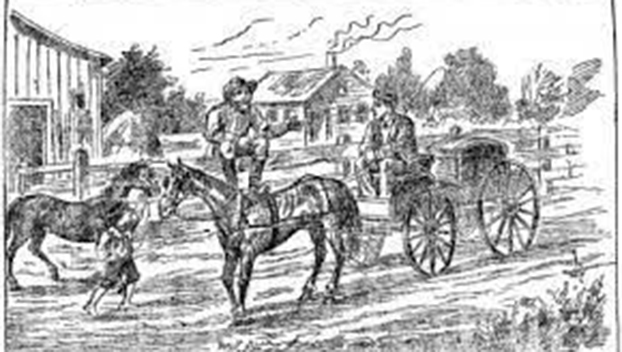 Horse trading was once popular between farmers who owned and used horses on their operations.

Horse trading… a vocation of old

Grant Dehart learned about horse trading from his father. He told this story about his dad to illustrate the peculiarities he had when it came to trading horses.

“My father would circle around a horse just looking them over and evaluating their value,” Grant Dehart told as though it happened last week instead of over 80 years after his father had passed on. “He did that with every horse he saw. He was deciding if he was interested in them. I guess that’s why I do the same thing, too.”

He recalled years before when a farmer by the name of Kingman stopped by our farm one mid-afternoon.  He said he was just passing by on an errand and thought he would stop by while in the neighborhood.

“Mr. Kingman didn’t say he was interested in a horse trade,” Dehart said. “It was like he was here on a social visit talking about the weather and how nice the folks were around here… not at all about a horse trade. “

As the senior Dehart and son looked over Kingman’s horses they determined it was a so-so team. They both became intrigued by the off-horse, a big, muscular gray. He was as well-fleshed as a ripe watermelon.

Kingman said he wasn’t interested in a horse trade, but was always willing to discuss a swap when someone had an interest. When Kingman mentioned swap it made the elder Dehart start wondering what kind of swap could be made.

“Soon Dad went into the barn and came out with our bay mare,” Grant Dehart recalled. “Dad had traded for her a few months before. She was a good-looking horse. She had a brown body, but her mane, tail and ears were black. Her lower legs were also black. She was a good horse ‘ceptin she had a bad habit of ridin’ the single tree, that is when she did team-work she let the other horses do all the pullin’.”

Kingman soon sat down and loaded his pipe, forgetting that he was in a hurry as he mentioned earlier.

“Dehart, I want to keep ole Bill,” Kingman offered. “He’s too good a horse for me to let him go. But as a personal favor to you I might trade him for your bay mare if you can throw in some boot… maybe $10 or $15.” (This was in the 1800’s when $15 would buy astronomically more than it will today.)

Then the trade talk began, with Kingman trying to uphold his horse’s value while he was trying to find faults with Dehart’s horse to enable him to make a better trade.

“Your horse ain’t windbroke is she?” Dad asked. “She’s got more wind than any horse that anyone ever had,” Kingman answered. Soon Dehart and Kingman agreed to a deal, but the amount of boot was to be $7.50. The deal was consummated and Dad counted out $7.50 after removing it from his boot. In that era many folks didn’t trust banks and many thought a person’s boot was one of the safest places to protect one’s stash.

“Our bay mare was harnessed and hitched in jig time,” Dehart’s son explained. “Dad led Gray Bill off to one side while Kingman got into his buggy. I thought it was strange that Kingman left so suddenly, but the horse trading had lasted a long time and he had to complete his errand.

“Dad was really pleased with his trade for Gray Bill. He led him into the barn and tied him in a stall that had a straight pole running across. Then we went in the kitchen and sat down for supper.

“Mom was listening to Dad’s talk about the trade when all at once we heard a large racket coming from the barn.”

“Pa, that’s your new horse,” she spoke up. “Your smart horse trading has got us a stump-sucker.”

They went to the barn where they found Gray Bill’s jaws clamped onto the pole that ran across the stall. Strange sounds were coming from him.

“He was making sounds like a cow pulling her feet out of the mud,” Dehart’s son said while chuckling. “I couldn’t keep from laughing and Mom told me, ‘Shhh, Dad’s getting madder by the minute.’”

“That horse was blowed up and still sucking air. I thought he would bust. That’s why he looked so sleek and muscular when Kingman brought him here. That horse trader musta’ stopped at a post and let that horse suck wind before he brought him to our farm.”

The elder Dehart thought he could break Gray Bill from the habit by keeping him away from wooden fences and poles, but it turned into a continuous task.

“He just wouldn’t eat,” the younger Dehart said years later. “When his wind pressure went down he started looking more like a skeleton every day. He didn’t hardly eat enough to keep from falling over.”

A couple weeks after the trade Mr. Dehart learned that Kingman lived about 10 miles away and took the horse over to his farm. He soon expressed his displeasure with Gray Bill and his idiosyncrasy. Kingman quickly voiced his own displeasure with the trade.

“I’m really glad that you came by because I was gonna come by and see you tomorrow,” he explained. “I have a problem with the bay gray mare you traded as well. When I put her with a team of horses’ she wouldn’t help with the pullin’. She rides the single tree.

“If you want her back I would be willing to trade her with you but I would have to insist on keeping the $7.50 boot money.”

The elder Dehart was pleased to get out of the deal even if he lost the $7.50. He learned later that Kingman had traded the stump-sucking horse to another farmer who had moved into the county. He got Gray Bill back each time and got to keep the extra amount that was paid as boot. It was modus operandi for him.

Mom told me to be quiet and not say anything to Dad about the horse trade unless I want to say, “It sure is good that we got our gray mare back.”

Jadon Gibson is a freelance writer from Harrogate, Tennessee. He thanks Lincoln Memorial University, Alice Lloyd College and the Museum of Appalachia for their assistance.

Readers answer the call in support of hometown newspaper

Back in March when COVID-19 began battering the economy, including small businesses like this newspaper, many of you asked how... read more