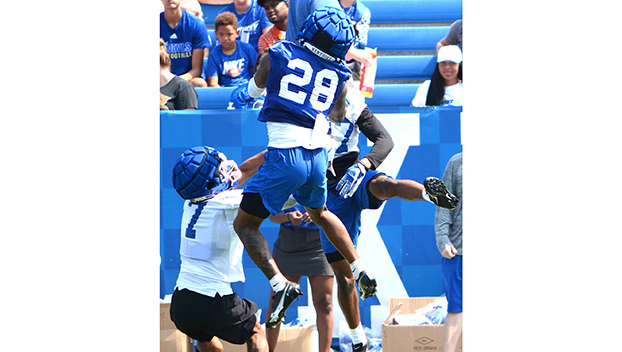 Lewis receiving a lot of attention in fall workouts

LEXINGTON, Ky. (KT) — It’s not time to pencil in Kentucky’s depth chart just yet, but some players are starting to make a name for themselves a week into fall workouts.

The quarterback battle between Will Levis, Joey Gatewood and Beau Allen has been getting the most attention during the past seven days but one of their top targets — junior walk-on receiver Rahsaan Lewis — has been turning heads this week.

Lewis, son of former NFL standout Ray Lewis, caught a pair of long touchdown passes at Fan Day last Saturday, including one from Levis late in the scrimmage. Lewis earned the trust of Kentucky’s quarterbacks in the spring as the team began installing Liam Coen’s offense.

In addition to the fan base, Kentucky coach Mark Stoops also has been impressed with Lewis.

“He’s shown up quite a bit, which is really good,” the Kentucky coach said. “That’s a position that we need somebody to show up to make plays – he’s doing that. He’s been consistent so I like that.”

Lewis considers himself a “playmaker” regardless if it’s a short or long play from the line of scrimmage.

“I’m always trying to make a play. I’m not going to try to ever do too much, try to hurt the team because, at the end of the day, it’s a football game,” he said. “You don’t ever want to get negative yardage. I just like to make plays. I don’t care how it happens.”

A transfer from Florida Atlantic, Lewis landed at Kentucky after Lane Kiffin left to take over at Ole Miss. He battled through injuries last season before making a breakout during spring workouts.

“Rahsaan’s a savvy football player who has unbelievable ball skills. The kid’s got like a 40-inch vertical, he can jump through the roof,” Coen said. “He definitely showed up last Saturday and he’s continued to do so. Made another good play the other day.”

As for the quarterback race, Stoops said it’s too early to make a determination on who will start in the opener against the University of Louisiana Monroe on Sept. 4.

“I don’t want to make too many comments,” Stoops said. “Too many people read into all that. I think, like you would expect through five practices, some guys will … each of them are having their moments where it’s like ‘wow’ and really good. And then they’re making some mistakes. We’ll continue to evaluate it. I think all the guys are playing good. … They’re doing some good things.”

• Sophomore Michael Drennen has moved from wide receiver and is now working out with the wide receivers. Izayah Cummings is working out at tight end after Keaton Upshaw suffered a season-ending injury during the summer break. Stoops said Cummings was a “natural” at the position and added that “he has an understanding (of the offense) and he fits in better than I thought he would, earlier.”

• Kentucky had the day off on Wednesday before resuming practice on Thursday morning.

Calipari: Beisner to play a major role in next phase of UK basketball

LEXINGTON, Ky. (KT) — John Calipari has tabbed T.J. Beisner to lead a position that “is going to play a... read more