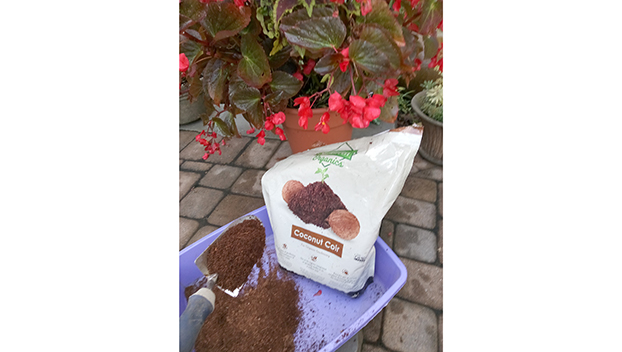 Gardeners should consider replacing peat moss with sustainable materials like coir (the fiber from coconut shells). Peat is not a renewable resource. Coir is an equally effective material that is lightweight and holds even more water than peat moss. It can be purchased as an ingredient in compost and potting soil, or on its own to make your own mixtures. Other substitutes include composted bark, leaf mold, or rotted sawdust. - Photo by Susan Jonas

Do you know where your potting soil comes from and what it contains? If you’ve been gardening for a long time, you probably cherish peat moss. It can be purchased by itself in bags or bales, or as the main ingredient in almost every growing medium.

Peat moss improves the soil’s ability to hold air, water, and nutrients. It’s lightweight, too, perfect for hanging baskets and pots. I’ve used it for years.

I fell for Monty and his garden during our long, lonely quarantine winter and I learn something new with each program. There are enough episodes to last for the rest of my life; the show has been on the air weekly for 20 years.

As he pots up seedlings and amends the soil in his large garden, Monty keeps reminding viewers to use peat-free compost. After hearing this for the umpteenth time, I finally had the sense to ask why and do some research.

It was news to me, but Europeans have been worried about peat harvesting for 50 years.  Beginning in 2024, the sale of peat will be banned in Great Britain.

Like me, you probably never stopped to ask where your peat moss comes from, assuming it is a good thing since it’s natural and organic, like cow manure or compost.

Now comes the bad news. Unlike manure or compost made from garden and kitchen waste, peat is not a sustainable or renewable product, at least not on a human time scale.

Peat comes from wetland plants like sphagnum moss, grasses, and reeds decomposing very slowly in oxygen-poor water. It holds water like a sponge.

But there’s a dark side to this story. In bogs, peat forms at less than 1 millimeter per year.

Peat bogs are found mostly in the northern hemisphere around the world. Although there are bogs in our northern states, most of the peat sold in America is harvested in Canada, the world’s largest exporter of peat.

Peatlands play a critical part in fighting climate change. Peat sequesters one-third of the world’s soil carbon, more than forests. Draining bogs and extracting the peat releases carbon into the atmosphere instead of leaving it locked in the ground.

A bog is a hard bottomed depression in the landscape that has collected and pooled rainwater for centuries. By slowing the flow of water, peatlands help in flood control.

With no input from groundwater or streams, the water in a bog is acidic and nutrient poor. These wetlands support uncommon plant and animal life by providing habitat for rare or endangered species, including various orchids and insect-eating plants like pitcher plants and sundews. Many bird species use the soggy environment for nesting, eating, and roosting.

What can we do to help protect this environment? As Monty Don reminds us, we can choose alternatives to peat, even though it’s perfectly legal to sell it in America.

A number of materials are equally effective, while being sustainable and easily replaced in the environment. Coir is one of them. (It’s pronounced COY-er or CORE.) Coir is the pithy fiber around a coconut shell, leftover from processing the nuts. It is an excellent substitute for peat moss when ground to a fine texture. Coir is lightweight and holds even more water than peat.

There are no coconuts growing in Kentucky though, so coir comes from tropical countries. If you object to buying imported material, there are local options such as leaf mold, composted bark, wood chips, or rotted sawdust.

Not all garden centers stock peat-free compost and potting soil. If enough people ask about these products, they soon will. You can buy bags now at Mulch 2 Go in Harrodsburg.

As I’ve said before, gardeners can have a tremendous effect on the environment. Even a few flowerpots on the patio for pollinators will help. By choosing organic methods, avoiding chemicals as much as possible, using native plants, composting, and now by going peat-free, we can change the world for the better.

Both my grandfathers lived long and productive lives. In some ways they were quite different. Though they were very nearly... read more