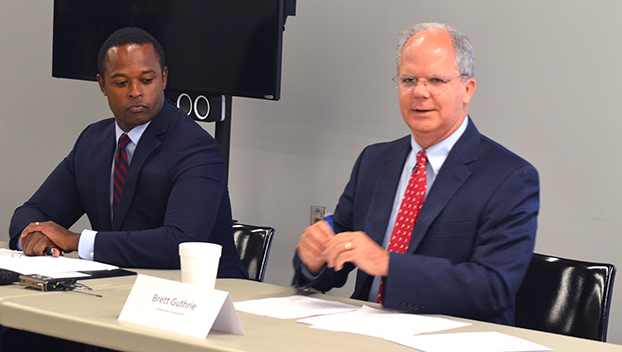 Congressman Brett Guthrie and Attorney General Daniel Cameron visited Danville City Hall to meet with local officials and law enforcement, as well as those involved with addiction treatment and facilities, for a round table discussion about drug and human trafficking on Aug. 10.

Topics included local needs, housing and transportation being central, as well as up to $460 million Kentucky could receive through a $26 billion opioid litigation settlement with four drug and pharmaceutical companies. Cameron said when settlement dollars come into Kentucky, about half of those funds will go directly toward cities and counties, and the other half will go toward the Opioid Abatement Advisory Commission.

The links between child abuse, drug abuse, and human trafficking were also discussed, as they can overlap.

According to a press release from the office of Guthrie, “city officials, educators, representatives of recovery centers, law enforcement officers, and other members of the community from Boyle, Garrard, Jessamine and Washington counties participated in the round table.” 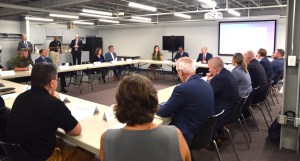 The round table included several members of the community and surrounding counties as well. – Photo by Olivia Mohr

Mike Cox, president of Isaiah House Treatment Center, said most drug users use multiple drugs, and their choice often has to do with what is cheapest and most accessible. What they and local law enforcement have noticed is that methamphetamine is trending; Cox said 33% of Isaiah House’s clients say it’s their drug of choice, instead of opioids, because it’s cheap and accessible.

Cameron asked where the meth is coming from, and Boyle County Sheriff Derek Robbins said it’s coming into the county, not being produced in the county in most cases.

“We are dealing with methamphetamine probably on a daily basis as far as locating it during traffic stops or … coming into contact with people under the influence of it,” Doan said.

When it comes to meth, it can help prevent withdrawals, which also makes it in demand. One man present said he is in recovery, and he had used meth when coming off opioids for a source of energy, since withdraws come with lethargy and other symptoms.

Robbins said another shift that has happened has been an emphasis on recovery instead of prosecution, which he said he agrees with. However, it puts law enforcement in a difficult position in terms of tracing larger distributors from the smaller-level traffickers because there is less leverage over those individuals to share information.

Doan said during a typical traffic stop where a small amount of a controlled substance is found, officers would work with that individual to find where they got the drugs. He said the last thing officers want is to take users who need assistance and put them in jail, but they need information from them to find the people who are higher up on the distribution chain, as well as cooperation between different jurisdictions.

“It takes cooperation from people involved in that to get to that level,” he said.

Assistant Deputy Attorney General Amy Burke said drug abuse, child abuse, and human trafficking fuel each other, too. Drugs can be utilized to make trafficking victims complacent, as one example.

And when it comes to human trafficking, “You think it’s always in Atlanta or New York or Chicago, but it’s in every community,” Guthrie said.

Cox said there is a huge need for long-term treatment, instead of just short-term, as there is a significantly higher success rate that he has seen with Isaiah House clients.

“Good outcomes are contingent upon adequate length of treatment, and most of our funding is focused toward short-term treatment, three days or less, and then you’re discharged,” he said.

This is an issue because many individuals have mental health issues or suffer from trauma.

“Sending people to short-term treatment is like sending them to urgent care,” he said. “They’re stabilized, but the time is not allowed to deal with the deeper, deep-seated root issues of addiction. We need time for that.”

Additionally, individuals may need assistance with a GED, higher education, job and life skills training, transportation and housing, which are other factors for success.

Kathy Miles of Boyle County Agency for Substance Abuse said ASAP wants there to be a small homeless shelter in Boyle County, an effort they’ve been working on for almost a year, but there hasn’t been sufficient funding. Also, in recent talk about how to use opioid settlement dollars, ASAP talked a lot about prevention and education.

“The fact is, if we don’t provide more support for children and families and youth … if we don’t put some of these dollars into figuring out how can we teach people about trauma-informed care, how can we prevent traumas, how can we help kids know there’s hope as they transition from that hard time leaving high school to whatever else they do with their life? If we don’t put a little bit of support and funding into that, we’re going to keep doing this,” she said.