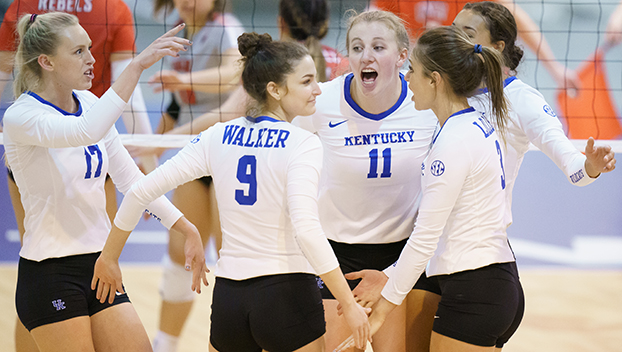 Sophomore Riah Walker knows she has to be a more vocal player this year but also a stabilizer emotionally for Kentucky. (UK Athletics Photo)

All-American libero Gabby Curry was a four-year starter on four Southeastern Conference championship teams and a key player on last season’s national championship team. Yet midway through her senior season she predicted that freshman Riah Walker of Florida was going to be an even better player than her the next three seasons.

“Gabby is a huge reason I even chose to come to Kentucky,” said Walker. “I wanted to learn from the best. I knew she was already a three-time SEC libero and I wanted to learn all I could. For her to make a statement like that about me is huge. It’s definitely a confidence booster.

“I always feel there is something you can get better at, something more to do. I am not thinking about being better than Gabby because I know how good she was and how hard she worked. So now I have to work that hard or even harder if possible.” 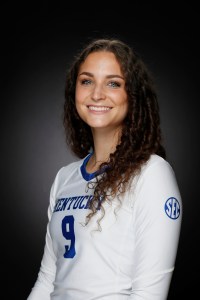 Kentucky has a scrimmage at Western Kentucky, a team it beat in last year’s NCAA Tournament, Thursday in Bowling Green and starts regular season play Aug. 27 in Dayton, Ohio.

Walker says her natural style/demeanor is not quite the same as Curry’s.

“On the court she was a very big presence. Loud and aggressive. I need to take a page from her book on that,” she said. “I have always struggled with being super loud on the court, but if no one hears you calling the ball they will take off for the ball.”

Walker knows liberos need to be team leaders and her coaches — and Curry — stressed that if the libbers “freak out” during a match teammates likely will do the same. She was constantly talking and encouraging teammates during the team’s scrimmage Sunday at Fan Day.

“You have to be a stabilizer of emotions. You can never have a crappy look on your face,” Walker said.

Coach Craig Skinner recently had the team listen to a podcast about doing things outside your comfort zone and the more you would do it, the more natural it would become.

“So if I can start screaming and yelling during matches it hopefully will come more  naturally,” Walker, a two-time Under Armour high school All-American, said. “That was Gabby’s personality and I need to do more of that.

“I am very excited for this season to see what we are going to do with the lineup and how the team meshes together, how we respond to a new year. We have no idea what it will be like. I am excited to see what the freshmen can do and I think they are really going to do well.

“Craig is always saying now that we have won a  national championship we will have a huge target and every team will want to play us and play their best. We have to be on our A game knowing that but I think that is going to be fun.”

Life in Kentucky has mainly been fun — except for the winter.

“Everything else feels like home to me except the winters. Being from Florida, I was not used to that cold,” Walker, part of UK’s No. 1 ranked recruiting class, said. “Everywhere I visited was not the same as Kentucky. I came here and it was just a huge family culture where everybody loved each other and everybody was friends. I just knew I would mesh well with this team and I did. But the winter weather, we are still working on that.”