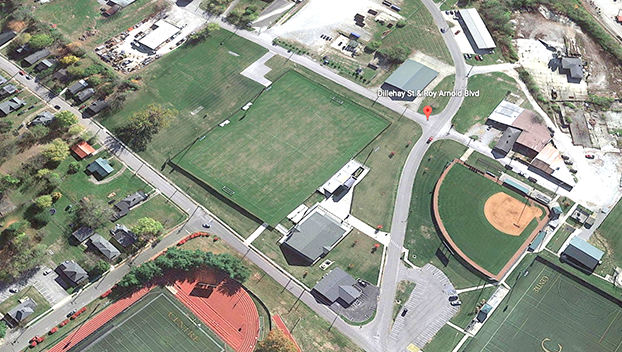 Centre project to shut down Dillehay

Editor’s note: A previous version of this story read that “Because Centre had requested a closure of Dillehay, Morgan said that in exchange, the city had asked to be provided with right-of-way for a connectivity between Bate Street and Roy Arnold Boulevard.” It should instead read “…Beatty Ave. and Roy Arnold Boulevard.” This story has been updated to reflect that correction.

Construction underway on Centre College’s new baseball complex off of Roy Arnold Boulevard, which is part of the college’s approximately $50 million Initiative for Wellness and Athletic Excellence, will soon cause a partial or complete closure on Dillehay Street.

This has caused concern for several adjacent property owners and businesses in what City Engineer Josh Morgan described as a somewhat light industrial area, including Todd Johnson Contracting, Inc.

At an Aug. 9 Danville City Commission meeting, about five property owners in the adjacent area attended regarding the upcoming closure. Two of them spoke: Hershel McKinley, who owns property on Dillehay Street, and Linda Johnson, CEO of Todd Johnson Contracting.

“That is the only access that I have in and out of Dillehay Street with our semi-tractor-trailer truck loaded with our heavy equipment,” she said during the meeting.

She said the equipment can’t come down Fourth Street and make a right-hand turn onto Dillehay loaded with heavy equipment; the truck would have to swing over to the left-hand lane on the busy one-way street. Also, she said there is not enough room for the large vehicles carrying such heavy equipment to make the turn.

The business has been at the location since the ‘90s, she said, and the only way in and out for the large vehicles has been Roy Arnold Boulevard, turning onto Dillehay. Johnson said she found out about the upcoming closure from a construction worker, who said that a fence to block off the street was on back order. She didn’t find out from the city.

“If the fence in closing the street is permitted, I will not have any access in and out of Dillehay Street,” she had said during the meeting.

She and McKinley both said that they have nothing against Centre and their desire for improvement of their facilities; their concern is in the closure of Dillehay.

At a June 28 city commission meeting, City Attorney Stephen Dexter said Centre owns property both north and south of Dillehay Street, with plans for development in the southern portion. Because Centre had requested a closure of Dillehay, Morgan said that in exchange, the city had asked to be provided with right-of-way for a connectivity between Beatty Ave. and Roy Arnold Boulevard.

Dexter said during the June 28 meeting that Centre had agreed to provide a general development plan for the relocation and construction specifications.

City Commissioner Kevin Caudill asked about property owners involved during the discussion of right-of-way relocation, and Dexter replied that the college owned property on both sides of the street; Centre had recently acquired the Republic Services property to the south of Dillehay Street. The resolution for request of relocation of Dillehay Street right-of-way was approved unanimously by the commission June 28.

Morgan said where the Republic Services property was is where Centre is building their baseball complex. He said after the right-of-way relocation request process was approved by the commission, the city has been approached by property owners on Dillehay saying how the closure would impact how they operate. He said he has met with them or talked over the phone and has also met with Centre’s architect and civil engineers.

When it comes to businesses, he said “The big concern is … they use that section of Dillehay to bring in large trucks and trailers to support their businesses, whether it be with deliveries or with Todd Johnson Contracting, bringing equipment in and out.”

So, the city will be looking at other intersections where they can improve the turning radius to make the alternate intersections work for the large vehicles, or possibly work with the Kentucky Transportation Cabinet to look at how to improve how large vehicles could turn onto Fourth Street.

“It’s one of those things where you don’t realize the lack of connectivity until you talk to each business owner,” Morgan said.

Later, he said, “Centre is trying to move this project forward because they’ve got some deadlines they need to meet to start on their larger project over by the football field next year, so we’ve got to keep things moving forward, at the same time accommodating property owners and businesses in the area.”

Since Centre owns both sides of the portion of Dillehay Street, he said, it could ask for the street shutdown because a property owner who owns both sides of a street can request it be closed. He said Centre plans on closing the street for construction “soon,” but he doesn’t know whether it will be a full or partial closure and isn’t sure of the exact timeline yet.

“We’re not restricting movement, but the trouble is that Furn Street is a little bit narrow, and the corner down at Dillehay is a really tight corner because there’s an old building that sits there, and then you couple that with the trouble of getting on and off of Fourth Street for some big trucks, and Fourth Street is one-way, so any vehicles coming from the south — they need to turn onto Roy Arnold and find their way over to Dillehay over in that area somehow,” Morgan said.

In the past, vehicles have come up Roy Arnold, to Dillehay, then come up the section that will be closed. Now, the city will need to give businesses a route down from Furn to Dillehay, which will shorten the route but can’t be done right now because turning radiuses are too small.

He said from a positive standpoint, the city will have a chance to fix things he said they probably should have fixed in the past anyways. For example, there are trucks taking longer routes that would take shorter routes if they could make the turns. Taking a close look at intersections and potential improvements will give the city the opportunity to make routes shorter and easier.

He said, “The city would want to provide at a minimum a temporary solution to accommodate the needs of the businesses on Dillehay before we would allow the street to be completely closed.”