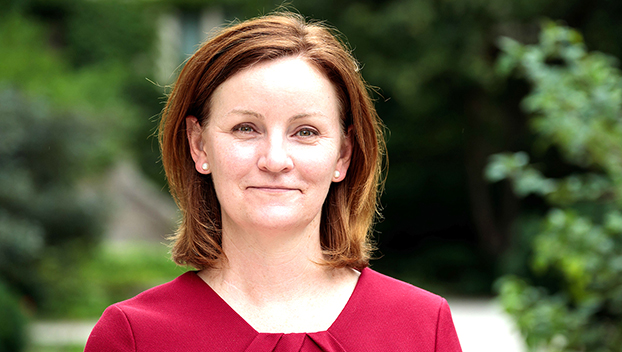 After a national search, Sarah Nolan has been selected to serve as the first Vice President for Strategic Marketing and Communications at Centre College and will begin her new duties on Sept. 13.

“I can’t wait to join the extraordinary team at Centre,” Nolan said. “I look forward to working with President Moreland and the Board of Trustees on their continuing efforts to strengthen Centre’s brand and reach, and I’m excited to help share the inspiring stories of Centre students and faculty.”

Currently Assistant Vice President for Alumni Relations and Development and Campaign Communications at the University of Chicago, Nolan has been responsible for the creation and execution of strategic, philanthropic communications and digital marketing. In this role, she oversees a team of writers, designers and web developers who work on major gift proposals and announcements, the University of Chicago Magazine, the College and Humanities division magazines, digital channels and direct response campaigns.

Nolan also managed communications for the successful University of Chicago Campaign: Inquiry and Impact that raised $5.43 billion when it ended in 2019.

Before this, Nolan was the first-ever director of international communications at the University of Chicago, working on public relations and reputation management in China, India, Europe and elsewhere around the world.

Centre President Milton Moreland praised Nolan as “an experienced higher education executive who has been working in strategic marketing at one of the world’s top universities” and added that he has every confidence she will “expand on a very experienced and talented communications team at the College.”

Members of the search committee were equally impressed, including Amy Frederick and Prayat Poudel, faculty members in the art history and mathematics programs.

Frederick said she is thrilled about Nolan’s selection, because “the breadth and depth of experience that Sarah will bring to campus is exciting. She understands the challenges we face as a small liberal arts college today and will help us better tell our stories to various audiences.”

In addition, Frederick was impressed with Nolan’s exceptional efforts at the University of Chicago to highlight faculty research.

“Sarah brings a wealth of experiences from political campaigns to government to academia,” he said, “and I am excited by the vision she will bring to building an integrated marketing and communications program to elevate Centre’s story and to advance our mission.”

Poudel also appreciated that Nolan has been a strong advocate for diversity, equity and inclusion (DEI) issues, commenting that she “has created a more inclusive community wherever she has been and has consistently demonstrated a willingness to spend personal capital in advancing DEI concerns.”

From her perspective as director of marketing and development for the Norton Center for the Arts, Jennifer Broadwater noted Nolan’s “strong experience leading data-driven marketing strategies that spark growth and collaborative approach to team building and partner development.” She added, “Her expertise in marketing automation initiatives and audience segmentation are sure to steer Centre in new and exciting ways.”

Before beginning her work in higher education, Nolan enjoyed a career in government and politics.

At the U.S. Department of State, she served as the acting deputy special representative and senior advisor for global partnerships in the Secretary’s Office of Global Partnerships. Prior to that, Nolan held the position of assistant chief of protocol for diplomatic partnerships. Nolan helped create and execute several public-private partnerships in these roles that brought together U.S. and foreign government officials, as well as business, academic and civic leaders.

Prior to her work in the diplomatic corps, Nolan worked on a number of U.S. political campaigns at both the state and national level, including three presidential campaigns.

In addition to earning a Master of Arts degree in art history and modern history from the University of St. Andrews in Scotland, Nolan has pursued further education at the University of Chicago in the advanced leadership program and through the executive education program at Chicago’s Booth School of Business.

Born in Washington, D.C., Nolan moved with her family to Kentucky as a child, and she is excited to return to her Bluegrass roots.

The beat coming from the next room is music to Justin Haddix’s ears. It’s the music that blares through every... read more