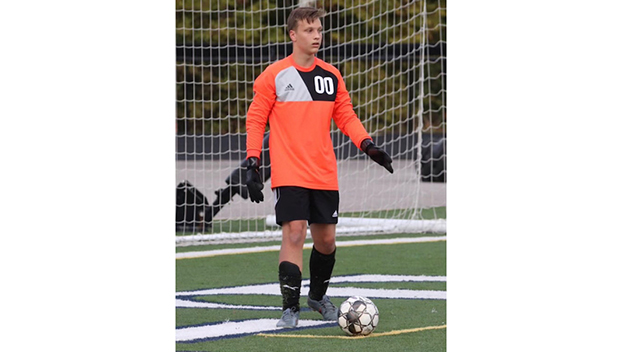 Freshman goalkeeper McClain Denny (Above) made some key saves for the Rebels in his varsity debut.

Boyle County boys’ soccer is back after a magical run to the Elite 8 with Ty Short at the helm for his first match as head coach.

The Rebels traveled to Frederick Douglass on Thursday night to take on the Broncos in what would turn out to be a fiercely competitive match.

Boyle came out strong in the first 15 minutes, holding possession and creating lots of opportunities to no avail, but the momentum swung when a Bronco forward broke away on the left side and smashed a right-footed curler into the top corner to give them a 1-0 lead.

The rest of the first half was dominated by the Broncos, who peppered shots at freshman goalkeeper McClain Denny, who, in his first varsity game, was up to the task every time.

Denny had mixed emotions going into his debut.

“Well, I was pretty nervous going into the game. Obviously, it is my first game and Frederick Douglass is a really good team, but I did my best to prepare for it and I am satisfied with my performance and I’m excited about the rest of the season,” he said.

The Frederick Douglass momentum continued into the second half with two quick goals from the Broncos extending their lead to a near-insurmountable 3-0 margin.

Following that third goal, the Rebels started to figure out the new formation that they switched into and began to have more and more success going forward.

After a missed 1-on-1 and wayward shot from close proximity, Boyle got a well-deserved goal from a 25-yard knuckleball by junior Tristan Compton off the crossbar and into the bottom corner, giving Boyle 15 minutes to try and find two more.

The rest of the game was all Boyle, with the Rebels pushing to try to get back into the game, but their efforts were unsuccessful and the Broncos escaped with a 3-1 win.

The Rebels will play next on Tuesday in the 2A state tournament against Mercer County and former head coach Jeremy Carlson.

Magwood has big dreams for his UK career

Chauncey Magwood has big dreams for his football career at Kentucky and should after what he did at Lee County... read more