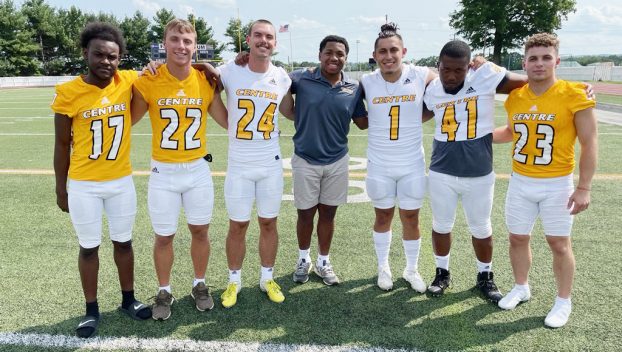 Will McDaniel (22) is ready to start his freshman football season at Centre College. McDaniel follows in the footsteps of his father, Tim, a legendary player at Centre, and his grandfather, Joe, who was a longtime successful coach for whom the college’s football field is named.

Having a McDaniel on the Centre College football sideline is nothing new. 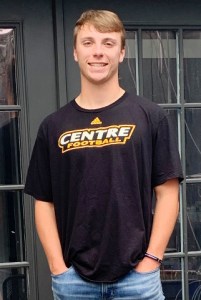 Farris Stadium field is named for Joe McDaniel who had a 101-63-3 record as Centre’s football coach from 1980-1997 before he became Centre’s athletics director.

His son, Tim, was an all-state football player at Danville High School who played for his father at Centre. He  was the conference offensive player of the year in 1989 and 1990 (he finished in the top 10 in the nation in rushing and scoring in 1990). He holds numerous school records, including rushing (3,897 yards) and scoring (324 points). He finished his career with 54 touchdowns and 5,148 all-purpose yards.

Now Will McDaniel, Tim’s son and Joe’s grandson, is ready to start his freshman season for the Colonels when the season opens Sept. 4 against Hanover.

“It means a lot to me to continue the tradition. I am really fond of my family and know what Centre means to our family,” said Will McDaniel. “At the same time, that was my grandpa and dad who coached and played and that’s not me. I am trying to do my own thing.

“Part of me is inspired by what they did and that means a lot to me. But I have to be my own person and do my own thing. Part of me just has to ignore all they did and make my own name.”

Will McDaniel did make a name for himself at Boyle County High School. He ran for 1,219 yards and 21 touchdowns on 185 carries his senior season when Boyle won the Class 4A state championship. He also had 10 receptions for 294 yards and three more touchdowns. He finished his career with 2,248 yards rushing and 39 touchdowns.

The former Boyle County standout knew his “legacy” would come up if he decided to attend Centre College.

“I visited Centre and really liked it for me and not for my grandpa or family members who have gone here,” the Centre freshman said. “I could just see myself being involved on campus, something I did not see in other places I visited.”

His family did “joke” they would like for him to pick Centre but he also knew they would support whatever decision he made. What he didn’t know when he picked Centre was that he would find an unexpected familiar face on the sideline, too.

“That was a sweet surprise,” McDaniel said. “After I committed he helped with the spring season at Centre and now he is back on the staff. I love him and am really glad he is here. He’s still the same guy he was at Boyle County. He will never change and that’s why I love him.”

‘Worker Wednesdays’ suggest honoring workers Dear Editor, It seems that every employer in the county – large or small –... read more