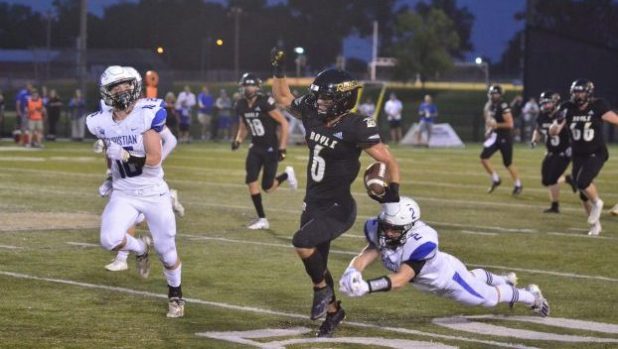 Cole Lanter (6) of Boyle County slips through a tackle attempt by Lexington Christian’s Frankie Knight (2) as LCA’s Mason Moore (16) moves in during the first quarter Saturday. - Photo by Mike Marsee 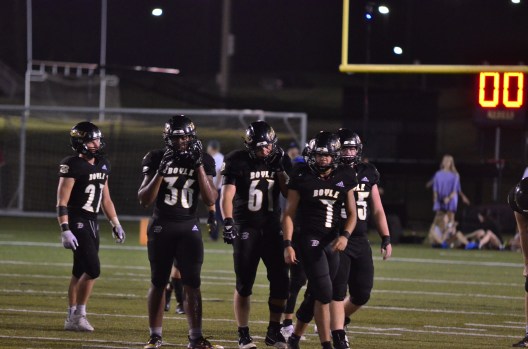 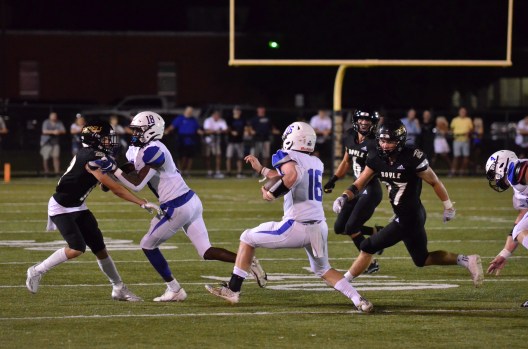 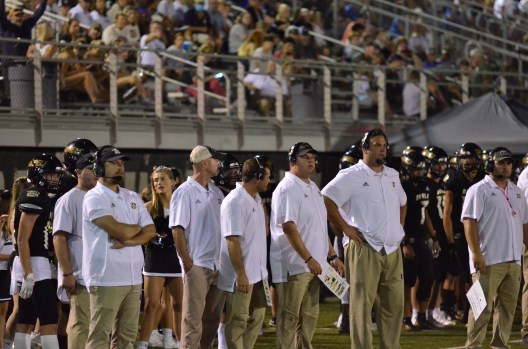 Boyle coach Justin Haddix, center, and members of his staff follow the action during the second quarter Saturday. - Photo by Mike Marsee 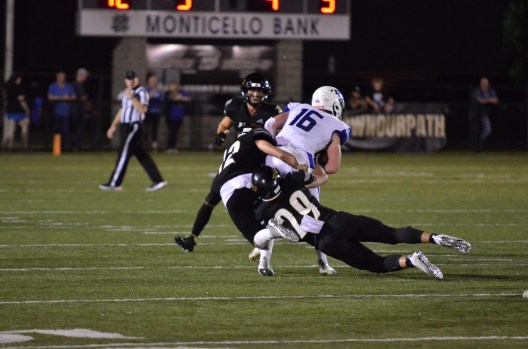 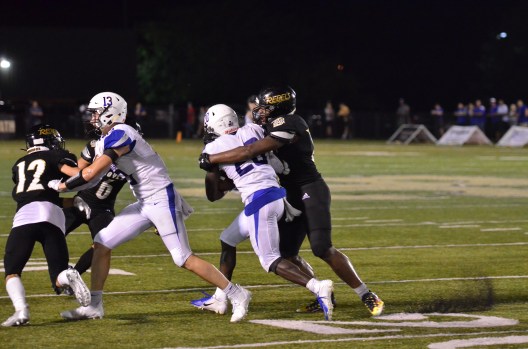 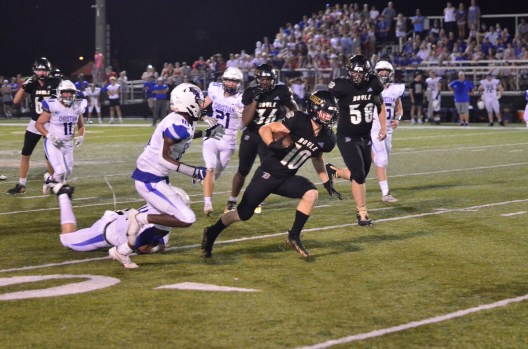 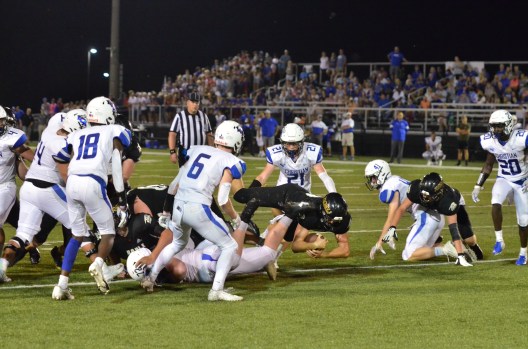 Jagger Gillis of Boyle County plungers into the end zone to score on a 1-yard run during the third quarter Saturday. - Photo by Mike Marsee

They were singing a different tune Saturday night at Rebel Stadium.

For the first time in some five years, the Boyle County fight song could not be heard following a home game. Instead, the Rebels yielded the turf to the players and coaches from Lexington Christian, who belted out a verse of “Victory in Jesus” at the top of their lungs.

The song was the culmination of the Eagles’ celebration after they ran roughshod over the Rebels in a way few Boyle opponents have been able to do over the past quarter-century.

Using an offense installed only days before the game, LCA ran for 452 yards to defeat Boyle 35-28 in the Rebel Bowl sponsored by Whitaker Bank.

“We knew we were going to be in a battle when we set up the schedule, and when we got this game we knew it was going to be a battle,” Haddix said. “It comes down to they made more plays than we did.”

LCA’s victory shouldn’t have come as a shock — the Eagles returned considerable talent after reaching the Class 2A finals last season, including four players committed to Division I schools — but the way the Eagles (2-0) sliced through Boyle’s defense was certainly surprising.

Boyle hadn’t allowed more than 400 rushing yards in a game since 2012, and its 10 opponents last season combined to rush for 451 yards, one less than LCA got Saturday.

LCA turned its offense upside down once it became evident that quarterback Drew Nieves would not be able to play — he was injured late in their week one win over Madison Central — drawing up a new game plan featuring a wildcat-based ground attack.

“We found out Drew couldn’t go on Monday, so we started installing it on Tuesday,” LCA coach Doug Charles said. “We felt like we had some pieces that would work. We didn’t have to change our entire style. … I think the biggest thing was they believed even with a change at quarterback we could win.”

Wide receiver Mason Moore took most of the snaps, and he and running back Xavier Brown split most of the carries. Brown, who also took some snaps from center, ran the ball 24 times for 222 yards and one touchdown, while Moore had 22 carries for 151 yards and three TDs.

Obviously, Boyle had not seen or prepared for the Eagles’ new look.

“It was new … but that’s no excuse,” Haddix said. “We were in alignment a lot of times and we just didn’t make the tackles, and they made more plays than we did.”

The teams traded touchdowns for most of the night before Brown broke free for a 69-yard scoring run with 3:32 remaining that became the game-winner.

The score was tied at 7, 14, 21 and 28. Boyle led only once at 7-0 after scoring on the opening drive of the game, but LCA’s defense got two critical stops that turned the tide in the Eagles’ favor:

On Boyle’s second series, the Rebels lined up for a field goal on fourth down-and-10 from the LCA 29-yard line but instead ran a fake. Holder Cole Lanter threw toward a wide-open Jagger Gillis along the left sideline, but the ball sailed over his head and out of bounds. The Eagles answered with a touchdown and never trailed again.

After Brown’s touchdown gave the Eagles a 35-28 lead late in the game, Boyle was backed up to its own 11-yard line when Gillis was intercepted by Parker Chaney at the 35 with 2:52 to play. The Rebels never got the ball back.

Those were the only times the Boyle offense was stopped — though it was slowed a bit in the second half, when the Rebels were held to 163 yards and seven first downs.

“They were really gashing us up the middle, and their physicality was getting to us a little bit,” Charles said. “Our guys, we just challenged their manhood a little bit at halftime. We said, ‘Guys, this is what we lift weights for. We work just like they do, we know what to do.’ We made a few adjustments on the whiteboard and the guys just made a few plays.”

“I think it was a lot of execution on our part,” Haddix said. “We had opportunities to make plays and we didn’t.”

Meanwhile, LCA’s offense failed to score only when the Rebels’ Hayden Kelley broke up a pass and Avery Bodner intercepted it just outside the end zone on the final play of the first half and when the game ended.

“We’ve got to tackle better. I said that last week,” Haddix said. “We’ve got a lot of things to learn from. There were some good things and a lot of bad things.”

Boyle’s bright spots included a big game by Bodner, a sophomore who ran the ball 18 times for 109 of the Rebels’ 235 rushing yards — a career high — in addition to his interception.

Gillis completed eight of 12 passes for 129 yards, and he plunged into the end zone three times from the 1-yard line. Lanter caught five passes for 93 yards and rushed six times for 70 yards and a touchdown.

“We had some playmakers (and) we had some balance,” Haddix said. “I thought our hurry-up (offense went well). We didn’t miss many signals and didn’t have a whole lot of penalties on ourselves.”

Extra points: Boyle’s Jackson Smith and LCA kicker Andrew Dobbs launched one football after another into the night in a matchup of elite kickers. They combined to go 9 for 9 on extra points and put nine of 11 kickoffs into the end zone (Smith landed one kickoff at the 4-yard line and another at the 1). … Linebacker Dalton Stone led Boyle’s defense with 17 tackles, followed by Smith with seven. … Luke Imfeld, a senior playing in only his second career game, caught two passes for 35 yards. … LCA attempted only three passes, with Moore completing one for 3 yards. … After going 0 for 8 on third-down conversion attempts in their season-opening win over Tates Creek, the Rebels were 9 for 11 on third down Saturday.

Mercer blanked: Mercer County managed only 38 rushing yards in a 28-0 loss to Bryan Station in the first game of the Rebel Bowl.

The Titans (1-1) trailed 7-0 after giving up a touchdown in the final minute of the first half, and they surrendered two third-quarter touchdowns to the Defenders (1-1), who outgained them 273 yards to 144.

Trosper Buchanan completed seven of 21 passes for 106 yards for Mercer, with Aaron Caton and Jackson Peavler catching two passes each. Peavler and Brayden Dunn combined to rush for 54 yards on 25 carries.