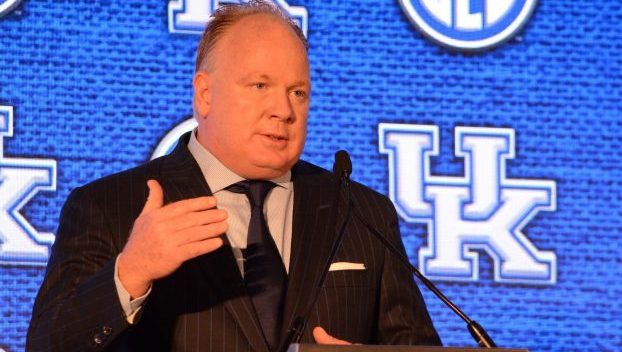 Mark Stoops is excited like never before about the upcoming season. (Kentucky Today/Keith Taylor)

Mark Stoops has been through the drill before each season opener and it never changes. He still feels the jitters leading up to kickoff.

The Kentucky coach will open his ninth season as coach of the Wildcats with a noon kickoff against the University of Louisiana-Monroe Saturday at Kroger Field. Along with the typical unknowns, first-year offensive coordinator Liam Coen will make his debut, along with quarterback Will Levis, a transfer from Penn State.

“You have a good feeling what your team is, you work with them every day and you know them, but until you get out there and do it, then it settles you down and you have a better idea of where do we need to work on, what are we doing good, let’s build on the good things and let’s improve on the other things,” he said. “You get caught in the moment of getting better, once you start. Early on, we’ve been going at this for a long camp, you’re kind of anxious and you just kind of want to see what your team really is.”

He added that the anticipation of opening a new season “are always there” regardless of the circumstances.

“I’m very excited, I’ve said this before, to me, it feels new, it feels like Year 1,” he said. “I don’t know, I guess it’s maybe with a lot of the changes that I’ve had. A lot of changes in the offense, or in the offense in general, and I think, for me, it’s just an exciting time.”

The Kentucky coach isn’t as much concerned with the preparation as he is with the execution and said “there’s a fine line” when it comes to doing “too much or too little” to open the season.

At the same time, Stoops has a feel for how much his team can handle in terms of capacity and is confident Levis will produce in his debut in the pocket.

Like his previous nine seasons with the Wildcats, Stoops is taking the same approach that has resulted in successful starts.

Two players not being talked about a lot even with all the hype over John Calipari’s team are sophomore Lance... read more