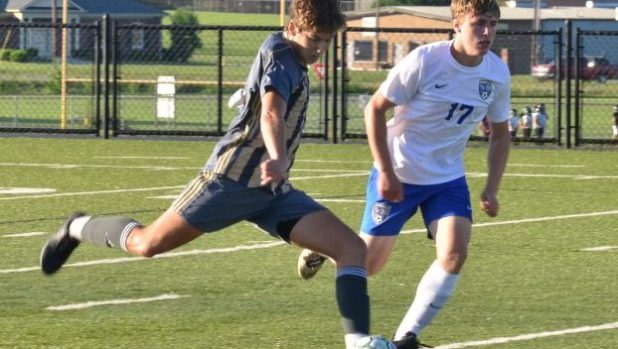 Tristan Compton, left, of Boyle County pushes the ball downfield as Danville’s Holden McKnight moves in during the second half Thursday. - Photo by Mike Marsee 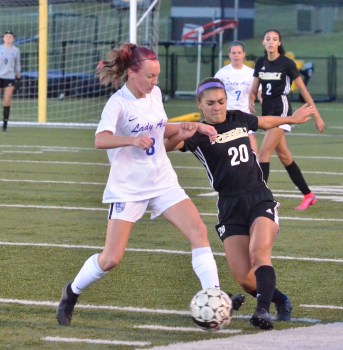 Chloe Strysick (8) of Danville and Abigail Gnann (20) of Boyle County battle for control of the ball during the first half Thursday. - Photo by Mike Marsee

“Melinda” and her brother are back at Boyle County.

Boyle’s girls and boys soccer teams carried off both Constitution Cups for the first time in five years after sweeping Danville in a doubleheader Thursday night.

The Boyle girls edged Danville 2-1 to regain possession of “Melinda,” the Rebels’ name for the Constitution Cup trophy that the winner of the crosstown rivalry gets to keep for a year.

The Boyle boys posted a 3-0 shutout to retain possession of that series’ Constitution Cup for a second consecutive year.

It’s the first time Boyle has won both games in the annual regular-season doubleheader since 2018.

The Boyle girls hold a 15-2 lead over Danville and the Boyle boys lead Danville 11-5-1 since the Constitution Cups were first awarded in 2005.

“Melinda” spent a year at Danville for the first time in a long time, but Boyle brought her back by winning in its first game in 13 days.

Payton Bugg scored two first-half goals and the Rebels kept Danville off the board for the final 65 minutes to avenge a loss to the Admirals last season.

“It kind of sucked that we lost it, and we didn’t play that good against them (last year),” Boyle senior Sophie Witmer said. “And my senior year we come back and we win, we play as a team, we have chemistry, and we just compete the whole entire 80 minutes.”

That allowed the Rebels to reclaim the traveling trophy that has spent only two years at Danville since it was introduced to the rivalry in 2005.

“Our girls have taken pride in the trophy. They were talking about it all week, saying, ‘We’ve got to get ‘Melinda’ home,’” Boyle coach Brian Deem said. “That’s an old nickname. It probably started in 2010, 2011. It’s just been ‘Melinda,’ and the trophy case is her condominium she lives in. They said she’s been on vacation.”

Boyle (5-3-1) bounced back after a long layoff. The Rebels hadn’t played since Aug. 20, and they didn’t practice during the week of Aug. 23 and canceled two games that week after some players tested positive for COVID-19 and others were in quarantine.

“I was very proud of my kids tonight,” Deem said. “Our bench was very depleted tonight, but I told our kids we’re not making any excuses. We’re going to go out there and compete and play and whatever happens happens. A lot of kids got some minutes that normally don’t.”

Deem said the Rebels played much better than they had practiced the day before.

“We communicated better, we played with a purpose,” he said. “I tried to simplify it down for them in the pregame. I said we have a couple of things that are on our goal sheet that we’ve got to do, and if we do we’ll put ourselves in position to win the game, and I thought we did that.”

Freshman Maggie Gnann said the Rebels played well individually and as a team.

“I think we did a good job winning balls out of the air and really competing together. We really worked together well,” Gnann said.

Boyle broke a 1-1 tie with 7:47 remaining in the first half when Bugg’s shot went off a Danville defender and got past the goalkeeper.

The Rebels focused their defense on Danville’s top offensive threats, Holly Helmers and Karolyn Valko, who had accounted for 16 of the team’s 20 goals in the previous six games.

“It started with our center mid(fielders),” Deem said. “I told them, ‘If we’re going to lose tonight, those two are not going to beat us.’

After Bugg scored Boyle’s first goal in the 10th minute off a corner kick by Witmer, Valko got through in the 15th minute for a tying goal.

“But I though our center backs did a much better job after that of trying to keep Valko in front of us, and I thought our center mids did a better job of releasing and putting pressure on Holly, not giving her the time she needed to get her head up and really play a good ball.”

“We kind of had to mark some special girls on their team who are pretty good and have skill, and I think we executed that well and we just played as a whole team,” Witmer added.

Like Boyle, Danville (3-4) is playing with a short bench, but that will be a season-long problem for the Lady Admirals, who have only four substitutes.

“We just made some technical mistakes that cost us in the end. We’re short-staffed … and in a game like this where everybody’s putting forth so much effort, it comes down to it,” Smith said. “Ultimately I’m extremely happy with the effort the girls put in. We didn’t win, but the effort was a winning effort.”

Smith said the technical mistakes can be corrected.

“I completely believe that’s something we can fix, and I told the girls that,” he said. “I said, ‘Don’t be discouraged, be encouraged, because I am.’ … Hopefully we can build on this for next time if we end up seeing each other again, which history says we probably will.”

Boyle and Danville have played in the postseason six times in the past seven seasons. Five of those meetings came in the 45th District final, which the Lady Admirals won 4-0 last season.

Boyle last won a regional title in 2018 and last won a district title in 2015, but Deem said he feels this team can get the program headed in that direction again.

“This team’s fun. They can be stubborn … but I think this group of kids right here is going to be that team that’s going to kind of get us on that track back,” he said.

“I think we have a lot of potential,” she said. “We have a ton of chemistry, more than we have in the past years. We all work together, we all give our hearts in every game, every practice that we have, and I think we can do well this season.”

Gnann said this win was a good place to start.

“For me, especially as a freshman, it’s really exciting, because it’s one of my first big games,” she said. “I think we all played really well.”

Ty Short got the better of a matchup with one of his mentors as Boyle kept the boys trophy — which is apparently unnamed — in its clutches.

Tristan Compton scored in the first half and Breydon Hatter and Matthew Britt added second-half goals for the Rebels, who had scored only six goals in their previous four games.

“We’ve got some good guys that can play possession,” Short said. “I was a little disappointed in the first half just with our level of play — I think we got surprised a little bit with the level of talent Danville has — but I’m glad that our captains and our seniors could take control and kind of lead us in the right direction.”

Short, a 2011 Boyle graduate, is a Rebel through and through — he played on the 2008 Boyle team that reached the state semifinals — but he played on a club soccer team coached by Danville coach Brent Beauman for two seasons and was an assistant on Beauman’s Danville staff from 2013-15.

“It’s great playing against a former coach,” Short said. “It’s awesome to get to be out here with him.”

Beauman said he thinks highly of Short’s coaching ability, but he wasn’t very happy for him Thursday night.

“Yeaaaah, no, not really,” he said. “Ty’s a great guy, and I’m glad Boyle hired him. If they hadn’t, I was trying to get him to come be one of my assistants. But it’s his school, and I’m glad for him.”

Danville (5-2-1) had few scoring opportunities in the second half, as the Admirals were able to get the ball but seldom kept it for long because there weren’t enough players getting deep into the offensive end of the field.

“We’re still not getting the numbers up,” Beauman said. “Between the 20 and the 40(-yard lines) we do really well. We’re possessing, we’re moving it, and then we play the ball forward and there’s only one person, so it’s one versus four, one versus five. You’re not going to get a lot of chances off that.

There are only 20 players on the Admirals’ roster, and Beauman is playing several freshmen.

“We have a lot of freshmen who played tremendous tonight for any age, but definitely for freshmen,” he said. “But I think these moments get to them a bit, so they were playing a little more cautious so we weren’t throwing as many numbers forward.”

Boyle played some tough opponents in the early weeks of the season, and Short said he believes the Rebels are building momentum.

The Rebels are the defending 45th District and 12th Region champions, and they are aiming high again.

“Coming off last season, I feel like we can definitely do something special as a team,” Compton said.

Short served as interim coach during the district and regional tournaments last season while then-coach Jeremy Carlson was away from the team due to COVID-19 protocols, and now he is putting his stamp on the program.