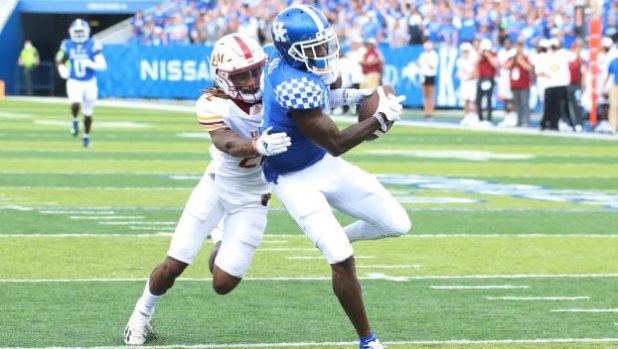 Kentucky wide receiver Josh Ali (6) hauls in a touchdown catch from quarterback Will Levis in the Cats’ win over Louisiana-Monroe Warhawks Saturday. - Photo by Jeff Moreland 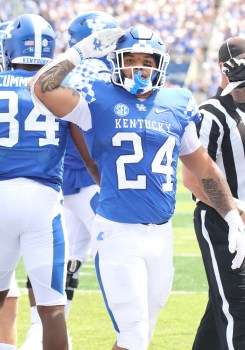 Kentucky running back Chris Rodriguez Jr. (24) salutes the crowd after scoring a touchdown Saturday against Louisiana-Monroe. - Photo by Jeff Moreland 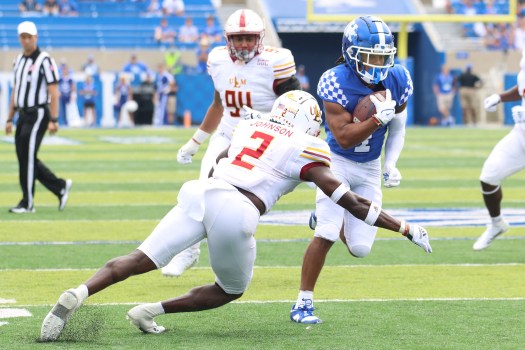 Quarterback Will Levis wasn’t surprised with the offensive numbers Kentucky amassed in a 45-10 win over Louisiana-Monroe on Saturday at Kroger Field.

In his debut, Levis threw for 367 yards and four touchdown passes. He completed three passes that went for 30 yards or more. In addition to a 33-yard touchdown strike to Wan’Dale Robinson, Levis threw a 58-yard scoring strike to Josh Ali and launched another 62-yard completion to Robinson in the first half.

By the time he left the game in the fourth quarter, Levis became the first Kentucky player to throw for more than 367 yards in his debut. He also became the first quarterack to collect more than 300 yards and at least four passing touchdowns in an opener since Drew Barker achieved the feat in 2016.

Overall, Kentucky threw for 419 yards, with 11 players on the receiving end of passes thrown by Levis and backup quarterback Beau Allen.

“I talked a lot about it in the spring that we were getting the ball completed down the field,” he said. “Will wasn’t here, but just the offense in general, the receivers gaining some confidence. We built on that this summer, and it was great to see them just complete passes, just the basics.

“We still have a lot of work to do with making the routine look routine. We have some pitch and catches out there that we’re fighting a little bit, but we’ll continue to get better.”

Although an interception on the first series was costly, the Wildcats didn’t waste any time getting into the flow of the offense with Coen helping get Levis into a comfort zone.

“We wanted to make some things happen,” Robinson said. “We knew that Will was going to get the ball to us, so we just had to make plays and that’s what we went out and did.”

Ali has learned to adjust to throws by Levis, some of which have been known to come at rapid speed.

In addition to a deep passing attack, a concern a year ago was the ability to seize opportunities within the red zone. The Wildcats finished 5-for-5 in the opener.

“I am pleased,” Stoops said. “I thought we did a lot of good things.”

• Stoops and Paul “Bear” Bryant are the lone coaches in UK football history who have won at least 50 games. Stoops is 10 wins away from tying Bryant as the winningest football coach in school history.

• Kentucky has won 12 consecutive non-conference games, including eight in a row at home.

• Kentucky limited ULM to just 87 total yards, the fewest in an opener since Central Michigan collected 78 in 1988.

• The Wildcats had 14 tackles for a loss, including six sacks. Josh Paschal led the Wildcats with seven tackles, a career high, and also had a sack that resulted in a loss of nine yards. DeAndre Square collected six tackles and 3.5 for a loss of seven yards. Jordan Wright had a sack for an 8-yard loss.