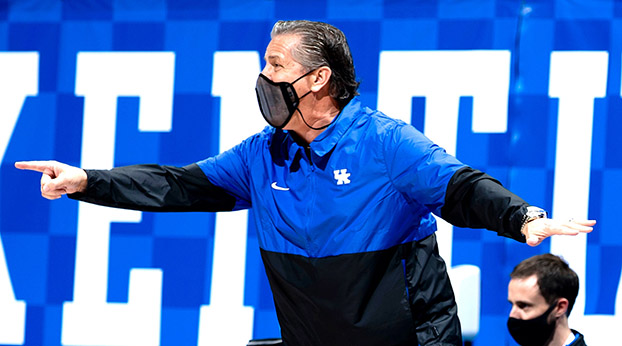 Kentucky coach John Calipari has long been a proponent of the COVID-19 vaccine and was vaccinated earlier this year.

The Kentucky coach became a breakthrough case when he tested positive for the virus earlier this summer. Calipari didn’t disclose the breakthrough case publicly in an effort to discourage others from getting the vaccine. He got the virus during a trip to New Jersey and wasn’t able to attend the NBA Draft last July.

“I didn’t want to discourage anyone to say, ‘Well, now he had it and why would I take (the vaccine)? It doesn’t matter,’” he said. “My symptoms were so mild that I was good. (I had some) aches and pains and stuff, but never got the fever and never got the headache. Nothing.”

He added he’s not sure where he got the virus, which kept him confined at home.

While in quarantine, Ellen Calipari spent her time in the basement of his home and Calipari occupied the remainder of the living quarters.

“She never got it and we tested her a bunch,” Calipari said. “I’ve had friends now who sent their kids to school. They’ve been vaccinated and they’ve got the virus, because they got it from (their kids). They got a breakthrough, but how about this? They’re not going to die. All I’m saying … I’m not telling anyone what to do with their body. I’m telling you what happened to me and what’s happened to my friends.

“My concern is my 12 players and our fans. I don’t want to hear somebody died because they didn’t (take the vaccine). I’m just saying, it doesn’t say you’ll never get it, but the chances of something severe happening are really, really low. I want us to have a full arena this year, but we’re gonna have to go with what the health officials say. Let’s hope we beat this down, and I got through to one person and saved a life.”

He admitted that he’s not a fan of getting shots and “you’ll never see a tattoo on this body.”

“What? I’m not taking a needle,” he said. “You take the (vaccine) and you’ve got a chance. I’m not saying or telling anybody what they have to do, I’m telling you what happened to me.”

The Wildcats went through a full season without a positive virus test last season, which Calipari considered “unbelievable” considering the circumstances, which included tests on a routine basis.

“We did not (test positive),” he said. “It made it hard, we did it because the health officials told us to do it,”

Calipari is still following local, state and University guidelines when it comes to the ongoing pandemic.