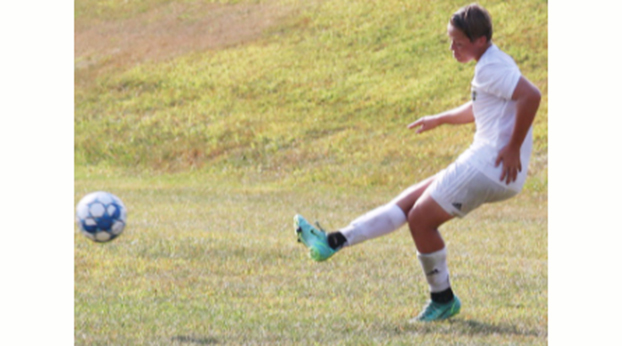 Sophomore Fain Hackney scored the opener early in the first half.

The Boyle County boys’ soccer team has had a slow start to the season with only two wins from six, including seven conceded in three of those games, so the Rebels saw this trip to Marion County to face the Knights as an opportunity to turn the tide on their season.

This game wouldn’t come without its challenges. The Knights came in with a 4-2-1 record and Boyle would be without head coach Ty Short due to suspension after his red card in the Woodford game, and junior defender Ben Reynolds who missed for personal reasons.

Despite that, the Rebels came out firing on all cylinders. They dominated the ball from the start and used their possession to create shot after shot after shot.

The Marion defense held strong for the first 15 minutes of the game until the Rebels finally found the net. The goal came from sophomore Fain Hackney on a looping chip from 22 yards out over the Knight keeper for a 1-0 lead.

The Rebels intensity did not drop after the goal and the bombardment of shots continued. Senior Judson Perry, junior Tristan Compton, sophomore Matthew Britt, and sophomore Fain Hackney all took a multitude of shots from outside the box, but none finding the back of the net.

The Rebels took the 1-0 lead into halftime, hoping to make it more in the second half.

The second half continued just as the first half had ended, with Rebel possession of the ball. Marion dropped extremely deep on the defensive end. At times, all eleven of their players were in the box defending.

This strategy worked for the most part of the second half until junior Tristan Compton got an inch of space and blasted a left-footed knuckleball into the top left corner of the net to extend the Rebel lead to 2-0.

Boyle pushed ahead 3-0 mere minutes later with senior Judson Perry blasting a shot into a crowd of Knights and getting a fortunate deflection into the net.

Marion came out of their shell after this third goal and nearly created an opportunity through senior Ethan Allender who broke away from the Rebel backline and nearly put his shot into the corner of the net, but freshman goalkeeper McClain Denny was up to the task.

Boyle walked away with smiles on their faces and a big 3-0 win.

Looking ahead at the schedule, the Rebels play on Thursday, Sept. 9 at home against Southwestern, Saturday, Sept. 11 at Franklin County, and Tuesday, Sept. 14 at Lincoln County.

Kentucky coach John Calipari has long been a proponent of the COVID-19 vaccine and was vaccinated earlier this year. The... read more