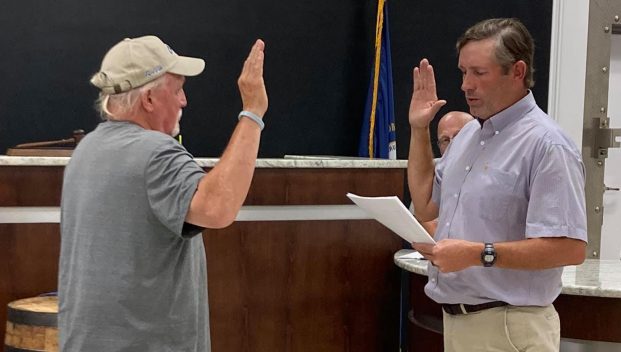 Photo of Michael Lankford, left, being sworn in from City of Perryville Facebook page.

City Clerk Mary Sleet said that Adam Gray announced his resignation on Aug. 6, the day after the city’s regular August meeting, when a new city council member was selected to serve after Kelly Gray resigned.

Sleet said, “Just for personal reasons is the only reason he said,” about if Adam Gray had given a reason why he resigned. He had served two terms previously, and during the current term he was on his second year, she said.

The council went into closed session to discuss personnel, and when they returned to regular session, they selected Lankford unanimously among those present, 4-0.

“The council talked it over, and like I said earlier, I’m glad that we’ve got people that are interested in being on council,” Caldwell said about the interest in the position from multiple people.

Lankford was sworn into office toward the end of the city council meeting.

• The council unanimously in a 4-0 vote decided for City Attorney Justin Johnson to draft an ordinance, which will require two readings, to adopt the 4% property rate increase on real property, for a rate of 0.28, compared to the compensating rate of 0.273 for the 2021-2022 fiscal year. Adopting the 4% increase will also require a public hearing.

“I know that would raise the tax rate, but frankly we’ve talked about how we kind of need some new equipment,” Johnson said during the meeting.

• Perryville has three businesses that sell alcohol, and the city will be drafting an ordinance, which will need two readings, to adopt a 4% tax “across the board” on alcohol sales for the city to collect from the businesses. The council made the decision unanimously.

• The council decided unanimously that a vacant lot located on E. Second Street, across the bridge, will be declared surplus and sold through online public auction due to interest in the property that has been expressed for business ventures.

• Part-time K-9 officer Larry Nunes will be retiring from the Perryville Police Department, as well as the K-9 dog he served with.