COVID in Kentucky ‘bad as it has ever been in pandemic’ 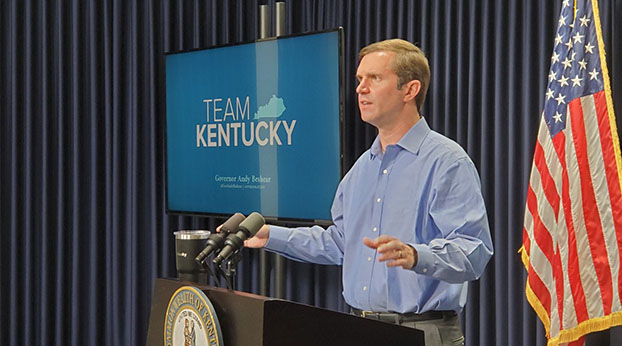 Gov. Andy Beshear on Monday repeated his request to Kentuckians to get vaccinated and wear a mask, as 2,426 new cases of COVID-19 were reported in the state, along with 29 more deaths.

“Right now, COVID is as bad in Kentucky as it has ever been in this pandemic,” he said during his weekly press briefing on the coronavirus. “And right now, sadly, we are one of the hottest states in the country. Virtually every single one of our counties isn’t just red, meaning a high incidence rate. We have some of the fastest spreading counties in the country. We hold far too many of the top 10 counties, in terms of incidence rate.”

The governor was referring to a New York Times story, which listed six Kentucky counties in the top ten nationwide. The Times report also said Kentucky currently ranks third in the nation for the highest number of new daily COVID-19 cases per capita, with a seven-day average of approximately 90 new cases reported per 100,000 people.

Last week, following a unanimous decision by the Kentucky Supreme Court that policy matters must be decided by the General Assembly and not through executive orders by the Governor, lawmakers passed legislation banning statewide mask mandates in schools and elsewhere.

Because of that action, Beshear said he must act accordingly. “That’s why I have called on every Kentuckian.

We’re at the point where only you can make the difference. I call this breaking the Thanksgiving Dinner rule, because it’s about having the tough conversations that we avoid.”

Hospitals continued to be hit extremely hard on Monday, according to Beshear. “69% of Kentucky’s hospitals, which means 66 of 96 of them, are reporting critical staffing shortages. This is our highest number to date, meaning our hospitals are struggling more today than at any other point of the pandemic.”

This is despite having some 400 Kentucky National Guard troops deploying to more than two dozen hospitals, freeing clinical staff from some administrative chores.

State Public Health Commissioner Dr. Steven Stack noted there was a small drop in new cases last week, “But I think most of that was due to markedly decreased testing on Sunday and Monday, associated with the Labor Day holiday.”

He also said monoclonal antibody administration in Kentucky has expanded dramatically. “In the last eight weeks, we have gone from about 204 monoclonal doses given in the beginning of July, all the way up to 3,642 doses given through last Wednesday. That is an 18-fold increase in just eight weeks.”

Dr. Stack explained that monoclonal antibodies are synthetic, laboratory-created antibodies. They give patients a temporary immune boost, ideally helping people who are already sick have a milder disease. They do not teach a patient’s body how to create its own antibodies. For that, you need a vaccine, he said.