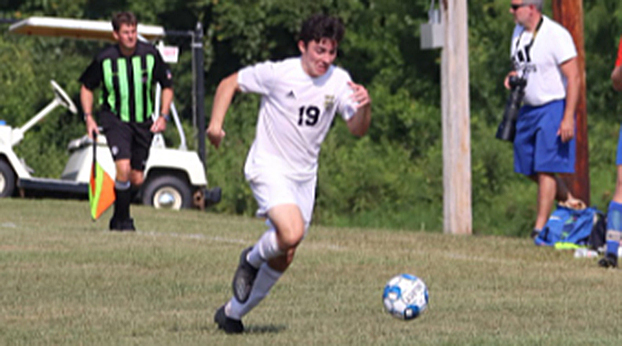 Senior AJ Fluty had a goal and an assist in the Rebel victory.

The Boyle County boys soccer team traveled to Lancaster on Wednesday night to take on the Golden Lions of Garrard County for a chance at the #1 seed in the district tournament.

This wouldn’t be a cakewalk for the Rebels though, the Golden Lions have their best record (6-6-3) since 2015 and are looking to escape the dreaded 4th seed in the district tournament.

Boyle got off to a quick start with senior Judson Perry chipping the Garrard keeper and putting the Rebels up 1-0 after 10 minutes.

Boyle doubled the lead mere minutes later with sophomore Fain Hackney going on a 20-yard solo run and burying his shot into the bottom right-hand corner.

Senior AJ Fluty put the third one in just before the half after a beautiful run down the line and the finish off of the cross of junior Tristan Compton.

Boyle went into the half up 3-0, but would definitely want more in the second.

The Rebels had a slow start with Garrard picking up their intensity and keeping it interesting for as long as they could.

Freshman midfielder Zak Dailey was a big help to the Golden Lions. He won countless balls in the center of the pitch and did his best to keep the game as close as it was.

Junior Ben Reynolds finally broke the Garrard defensive wall with an absolute screamer from 20 yards out into the bottom left corner of the net.

Junior Matthew Britt scored on a corner and extended the lead to 5-0 with less than 15 minutes remaining.

The final goal of the game came from junior Brock Keller who put away his shot from close range to make it 6-0.

The Rebels clinch the #1 spot at the district tournament and will face Garrard County again in the 1st round.

McClain Denny recorded his 7th shutout of the season, equaling the total of last season. “I was happy to get another shutout. Always good to keep the ball out of the net.”

Boyle plays next on Thursday against West Jessamine at home, then they will head to Berea on Saturday.

Calipari will have options at point guard