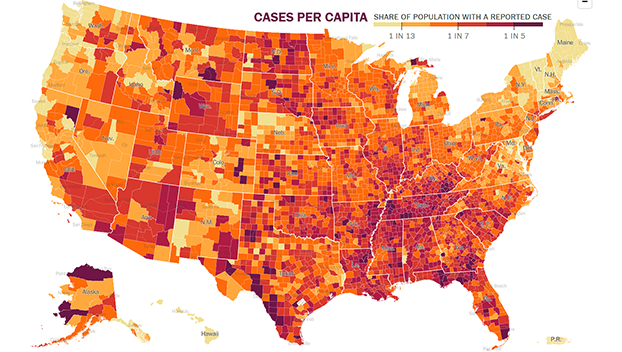 The Delta variant of the coronavirus “is cutting a devastating swath through Appalachian Kentucky,” the Louisville Courier Journal reports.

Reporter Chris Kenning cites experts who blame experts “some of the nation’s highest poverty rates, less access to health care and a longstanding reluctance to seek care early, and pervasive smoking and chronic illness such as diabetes and lung disease that worsen Covid outcomes. All this mixes with a toxic brew of pandemic misinformation and politics.”

Kenning’s object example is Willie Hudson of Heidrick, near Barbourville, who had a cough and got tested on Aug. 15. “One of his daughters had Covid-19, but the family had spurned vaccinations,” because they thought the vaccines were unproven or “might cause a stroke, they believed, and could be a government plot to track people,” Kenning reports. “The virus, they heard, was being exaggerated for Democratic political gain. Ten days later, on Aug. 25, after gasping and thrashing, Willie Hudson died in a Kentucky hospital — leaving his daughters stunned, grieving and scrambling to get vaccinated.”

Others have done likewise, but “so far vaccine rates are ticking up slowly and remain too low in many areas to provide a sufficient bulwark,” Kenning reports. He cites a Corbin funeral director who has had the disease and held several funerals for victims but is skeptical of the vaccines: “If this shot is so good, why have they tried to bribe us to take it, to make us take it?”

Scott Lockard, public-health director of the Kentucky River District Health Department, told Kenning that misinformation isn’t the only problem: “Somebody who doesn’t engage in social media, doesn’t watch the news, primarily farms and comes to town a couple of times a month, they’re like, ‘Well, I guess this Covid’s a pretty big deal, isn’t it?’”