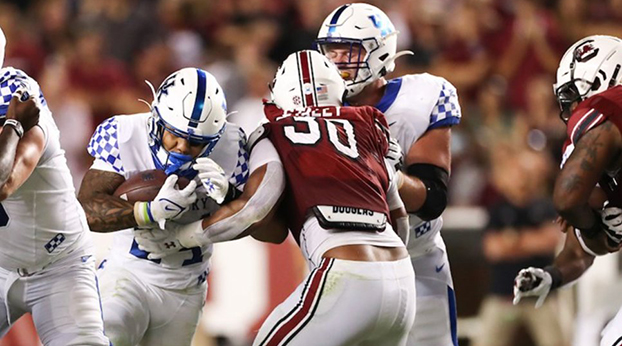 Kentucky football coach Mark Stoops is making no excuses regarding his team’s 11 turnovers through the first three games.

“We need to clean up the turnovers, the fumbles in particular,” he said Monday. “We will work extremely hard on that this week. I believe it is something that we can get corrected, and we will. … I’m not going to sit here and it’s not going to be the end-all, be-all, it can’t be. There is a lot of good things going on, but it simply cannot happen. We understand that. We’re going to technically talk about it and go through things, and then we’re going to move on.”

Kentucky had three turnovers — two lost fumbles and an interception — in Saturday’s 16-10 win at South Carolina. The Wildcats (4-0, 2-0 Southeastern Conference) have thrown five interceptions and lost six fumbles to open the season and Stoops is confident running back Chris Rodriguez and quarterback Will Levis will trim down the number of miscues going into Saturday’s showdown against No. 10 Florida.

“I’m confident Chris that will get it corrected,” Stoops said. “Any time you let things go to the point where they are right now, there’s a concern, and it needs to be addressed. There’s no denying that. I’m not at all at a point where we need to be in a state of panic or anything, but we have to get any habits that we’re creating early in the season, we have to get corrected.”

A concern prior to last week’s contest at South Carolina, Stoops said the Wildcats were more “complementary” on both sides of the ball, especially on defense, in the team’s fourth game.

“I thought we played much better complementary football (last) week. You heard me talk a week ago here, that was definitely the worst we’ve ever played for each other (against Chattanooga). (Last) week we complemented each other very much. It’s hard to define exactly those moments, but I think you can understand that.”

As for the offense, Stoops said a lot of the team’s miscues are “self-induced” which has stalled several positive drives during the first month of the season.

“I think we got a little off track this past week being backed up. It’s not an excuse but I think one of the possessions we were backed up, we got a couple of first downs, created some decent field position, got a punt. … I think we had one punt early in the second quarter and then we kind of got back on track and then the fumbles jump in. We go the long drive, end up with a field goal, but get really close to scoring a couple of times, good drives, get another good drive, and then fumble, fumble. That doesn’t help anybody. That really hurts getting into a routine.”

“I talked to Tink (Belcher) about it directly, and I’ll talk to DeAndre about it today, but I went down and talked to Tink this morning and Tink was all smiling about it,” Stoops said. “I wanted to make sure he was OK. He said him and DeAndre were laughing about it after the game and had words. He loves DeAndre, and DeAndre loves him. No hard feelings.“

For the second time this season, Kentucky center Luke Fortner was named Southeastern Conference Offensive Lineman of the Week. Fortner graded at 84 percent with 26 blocks at the point of attack and didn’t miss an assignment or allow a sack last weekend at South Carolina,

Fortner also was named the SEC offensive lineman of the week following a season-opening 45-10 win over the University of Louisiana Monroe.

Kentucky’s contest against LSU on Oct. 9 has been set for 7:30 p.m. and will be televised on the SEC Network.

Keith Taylor is sports editor for Kentucky Today. Reach him ay Keith.taylor@kentuckytoday.com or via Twitter at keithtaylor21

Mintz will be in sixth season at UK this…