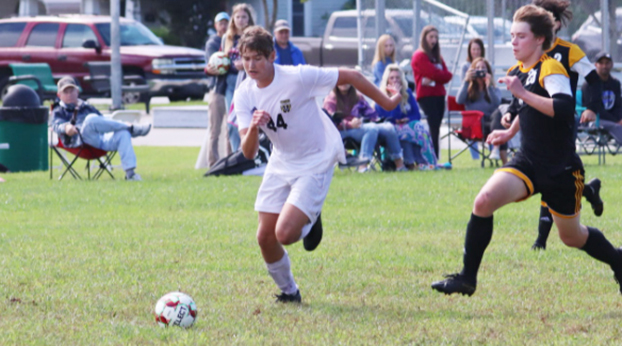 Junior Tristan Compton nutmegged the Eagle keeper to make it 1-0 early in the second half. He also had 6 goals and 2 assists in their trip to Berea on Saturday in an 11-1 victory over Berea Community High. - Photo by Paul Cooley

Six goals. That is the margin of defeat for the Boyle County Rebels boys soccer team in both of their last two meetings with the Madison Southern Eagles.

Boyle was embarrassed after both of those results and would be looking to right those wrongs in their matchup on Tuesday night.

The Rebels showed their intent from the get-go. Boyle controlled possession, as would be a theme of the game, for a majority of the first portion of the game, but to no avail.

Boyle had trouble finishing throughout the game, despite the number of chances they created. Every shot seemed to be mere inches wide or straight to the Southern goalkeeper.

The Eagles were a counterattack team. They were willing to allow Boyle to hold the ball and then when they won it back, they utilized long balls and the pace of their attackers to score goals, but they were not quite so successful in this one due to the speed of junior defender Andrew Leines.

Boyle created a multitude of chances through the feet and quick turns of junior Tristan Compton. He found the space between the opposing center backs brilliantly and used his quickness to run at their backline.

He created chance after chance, but couldn’t seem to get that final touch that would allow for the shot because of the stellar effort by the Madison Southern defenders.

The Rebels went into halftime disappointed with the 0-0 scoreline, but the Eagles would be elated with their ability to keep Boyle off the score sheet.

The second half started with a bang. Compton finally bagged his goal through a nutmeg of the keeper, but all the thanks go to senior forward Judson Perry. Perry gave the ball away in the box and tracked his man all the way to midfield, won the ball back, and played it into Compton for the goal.

The Rebels for the next portion of the game, creating more and more chances. Sophomore Fain Hackney and junior Jack Little both had shots that missed the goal by mere inches.

All of a sudden, Compton found himself through on goal yet again and slipped his shot past the keeper and off the post and out.

With about 10 minutes to go, Boyle went extra defensive and Madison Southern was allowed to create some stuff.

The Eagles had a few free kick chances and long shots, but nothing major until that fateful moment.

With less than 30 seconds to go, the ball popped up into the air and Leines went up to win the ball and got tangled up with an Eagle forward.

The referee gave the penalty. A shocking decision in the eyes of Boyle County, but, nonetheless, a lifeline for Madison Southern.

The Southern player stepped up and buried the penalty, along with the hopes of the Boyle County Rebels. 1-1 final. This draw highlights the importance of finishing opportunities when they arise. The Rebels squandered their chances at times and it ended up costing them.

Boyle will wrap up the regular season on Thursday at home against Lafayette. This will also be the Rebels senior night.

They will be honoring Morgan Jones, Ethan Wheeler, AJ Fluty, and Judson Perry for their contributions.