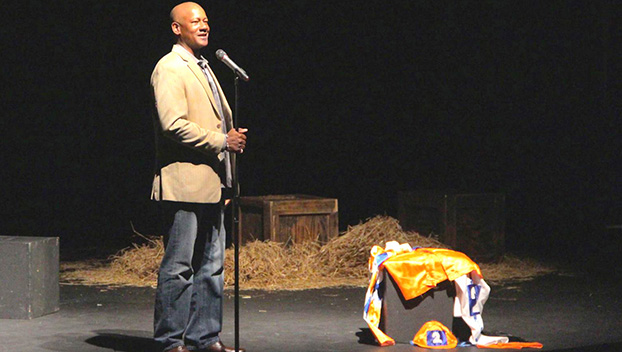 Frank X Walker, the namesake of the upcoming Frank X Walker Literary Festival for the Danville and Boyle County school districts, shared some possibilities of what he might be reading this year for the festival and some of the festival’s history, as well as his background with the Danville Independent Schools district.

This year’s festival will be taking place Oct. 18-22, with keynote readings on Oct. 19 and Oct. 21 at the Boyle County Schools Performing Arts Center, said Jane Dewey, director of arts education for Danville Schools. There will also be a community reading on Oct. 21 at 7 p.m. in the Gravely Hall Performing Arts Center, she said. Events are planned to be in-person with virtual elements.

“Seating may be limited during in-person events,” Dewey said in an email.

“I’m pretty sure I’ve been back to Danville to do something at at least one school every year since I graduated,” he said.

Walker had Atkins as a middle school history teacher and later became principal at Edna L. Toliver Intermediate School, where Walker attended elementary school. During Atkins’ time as principal there, Walker participated in storytelling, Kwanzaa and speech programs at the school, especially because at that time he still had some relatives in the school system still.

As for the festival itself, in its first year Walker and others involved invited friends from around the state as they could to have as many Kentucky authors sharing as possible, and Boyle County Schools and Centre College were involved during the first year as well. Theater also came into the mix, as Walker is a playwright too, not just a poet. He also creates art and has been featured in exhibits in Lexington, where he is a professor at the University of Kentucky, and Danville, so he said there’s a possibility in future years for the annual Frank X Walker Literary Festival to feature an art exhibit too.

“The goal is the same every year, to me, is to celebrate the importance of literacy,” Walker said about the festival.

He said he hopes the festival encourages children of all grades to consider pursuing writing as a career or major in college. He’ll be a reader during this year’s festival.

“I’m always excited to come home,” he said. “That’s number one. Danville’s still home to me.”

He’s proud to be from Danville, he said.

“I think that Danville High School provided me with a very excellent preparatory curriculum and prepared me for college and success in the real world and the most amazing teachers in the school system. I think they passively, or without their knowledge, carried me to consider teaching as a profession.”

Later, he said, “I think every time I drive into town and see one of those signs that say ‘home of Frank X Walker,’ I’m reminded that the festival’s coming up.”

For this year’s festival, he’s going to pull some of his favorite poems from several of his books. It’s difficult to read from a single book, he said. He might also share some of his brand-new children’s book scheduled to come out next year. He also has a fiction project in the works, which he said hopefully will be published in the next year or two and takes place in a made-up town similar to Danville.

Work he reads at festivals depends on the audience, he said: their age, familiarity with his work and sometimes what’s going on in the world or what their teachers are teaching them at the time. There are some consistent underlying themes throughout his work, though.

“I generally talk about the same things — family, identity, place, social justice and history,” he said. “Those are my favorite themes.”

The festival is annual, and for the first time this year there is also a poetry contest involved for the K-12 schools. Contest dates began on Aug. 24 and close today, Oct. 1, at 11:59 p.m. Children can submit their work, and selected poems will be published in a 2021 Poetry Anthology, which will be made available for purchase and at each school’s libraries, according to the poetry contest information.

Covid-19 deaths in Kentucky are at record levels