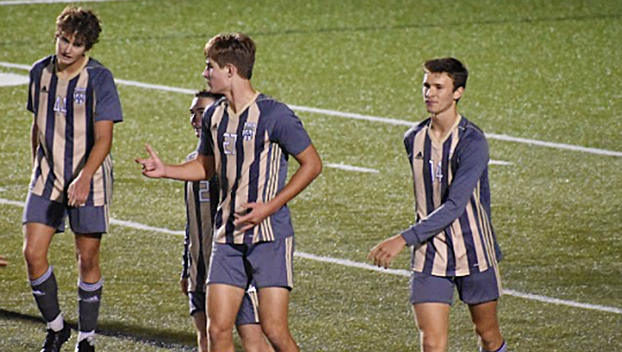 The Rebels picked up their first points against a Lexington school in over 5 years. (Photo by Sophia Wilson)

It has been 1864 days since the Boyle County Rebels Boys Soccer team came away from a matchup with one of the Lexington schools with a positive result. That streak would end last night with Boyle picking up a 1-1 draw against the Lafayette Generals.

The Generals were no pushovers, though. They came into the game with a 9-5-2 record, ranked 29th in the state in the KHSAA RPI rankings.

The Rebels, on the other hand, were 9-4-1 and ranked 24th in KHSAA RPI rankings and trying to make a statement with a win before next week’s district tournament.

The Rebels had a relatively slow start as they were starting some guys in different spots due to senior night, but they got their feet under them and became more and more comfortable in possession against the quickness of the Lafayette midfielders.

Boyle continuously picked up steam, creating more and more scoring opportunities until finally, junior Tristan Compton made the breakthrough with a little hustle goal that he clipped around the Lafayette goalkeeper and into the back of the net.

The Rebels would go into the break extremely satisfied with that 1-0 lead.

Boyle rolled their momentum from the first half over into the beginning of the second. They still controlled the ball and limited Lafayette’s chances, but they were unable to snatch a second goal or even another clear-cut chance.

As the half wore on, the Rebels became more defensive and tired while the Generals, with their larger squad size, were fresher and more attacking-oriented. 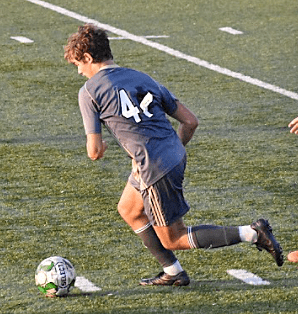 Junior Tristan Compton (Above) scored his 20th goal of the season in the match. (Photo by Zoe Moore)

The General breakthrough came with 20 minutes remaining. A questionable corner kick was awarded, but Lafayette took advantage and blasted a header into the top left corner off of a beautiful cross by a General forward. 1-1.

Lafayette continued to push and nearly created a second goal, but the cross was just too weak and the Rebels rallied to the ball and stopped it.

The final score was 1-1 with neither team coming off the team totally satisfied, but both of them recognizing that their opponents were a quality side.

The Rebels will play next on Tuesday at Garrard County in the first round of the 45th district tournament.