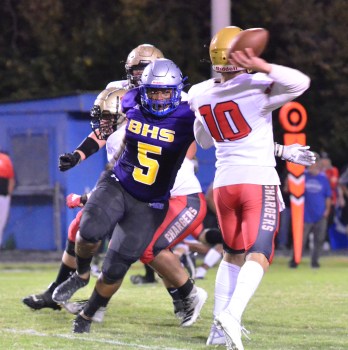 Antonio Montes (5) of Danville closes in on Bullitt East quarterback Travis Egan (10) during the first quarter Friday. - By Mike Marsee

Caleb Burns (3) leads his Danville teammates onto the field prior to a recent game in this file photo. - Photo by Mike Marsee

Members of the Bate High School Alumni Association were recognized Friday at Admiral Stadium at halftime of Danville's game against Bullitt East. Danville continued a tradition that began in 2017 of paying tribute to Bate High School; John W. Bate, who was a teacher and principal in Danville for 59 years; and the school's alumni at one home football game each season. The Danville players wore jerseys with the purple and gold colors of the school, which opened in 1912 and served African-American students in Danville until 1964. - Photo by Mike Marsee 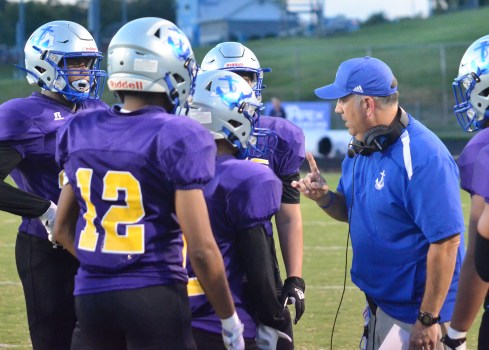 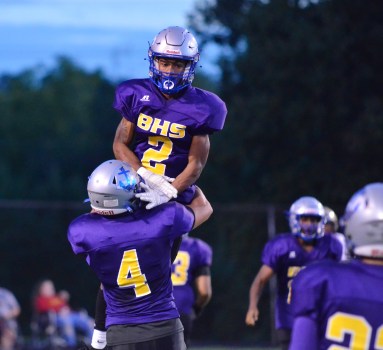 Corydon Crawford (2) celebrates with Danville teammate Justus Turner after Crawford scored on a 51-yard reception on the first play from scrimmage Friday. - Photo by Mike Marsee 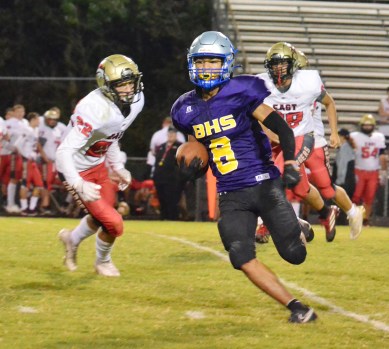 Keelan Story (8) of Danville slices through the Bullitt East defense on his way to the end zone on a 39-yard pass play during the second quarter Friday. - Photo by Mike Marsee 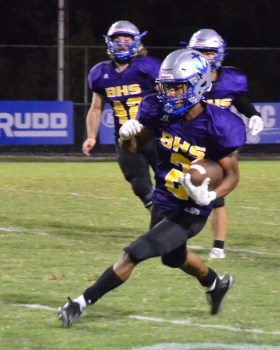 Corydon Crawford (2) of Danville runs through a hole during the first quarter Friday. - Photo by Mike Marsee 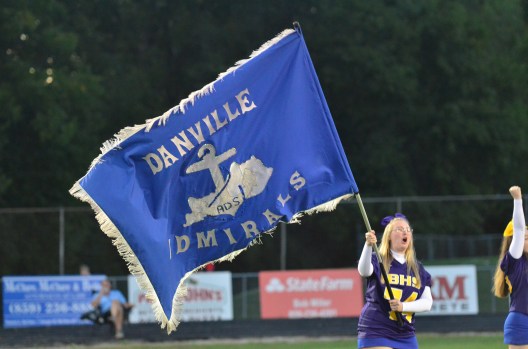 A Danville cheerleader waves a flag prior to Friday's game. - Photo by Mike Marsee 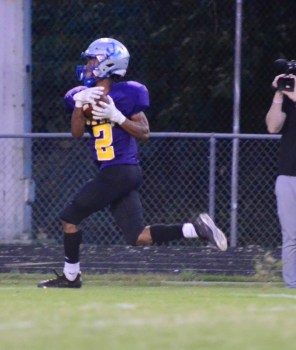 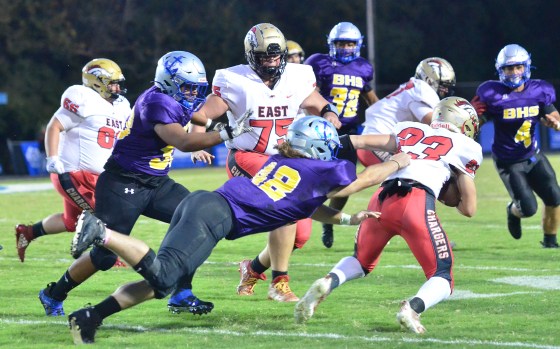 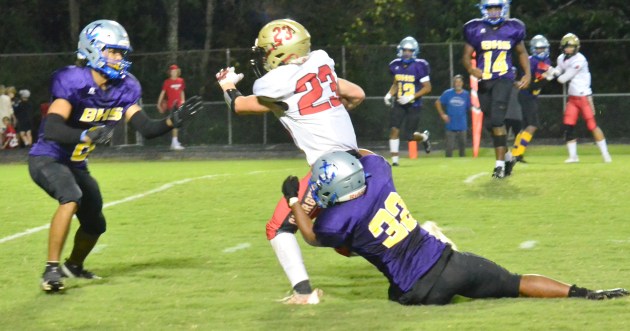 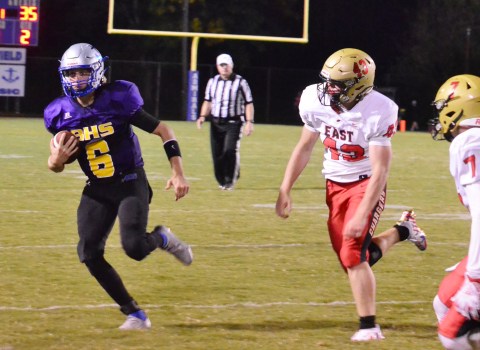 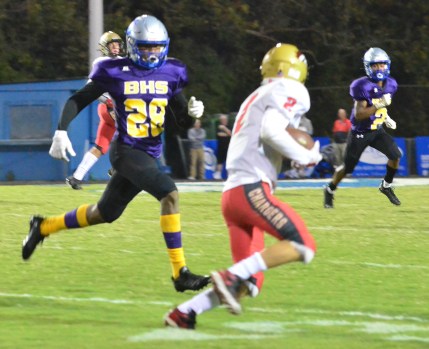 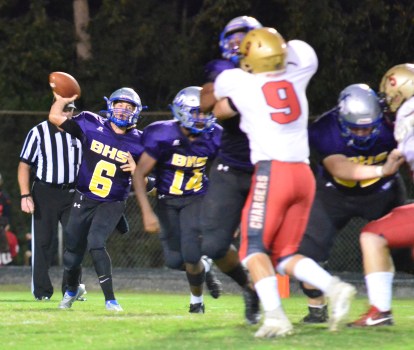 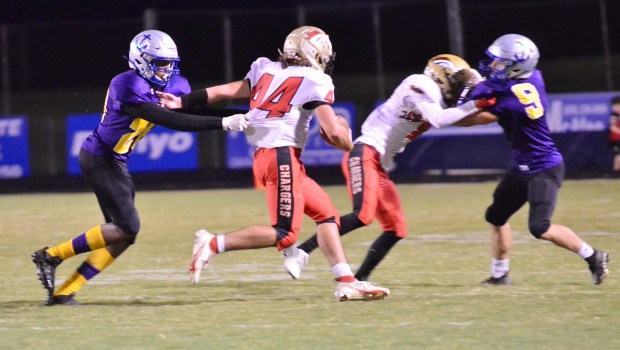 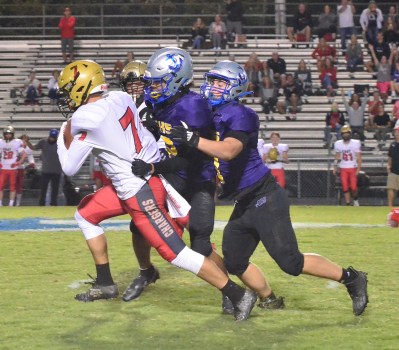 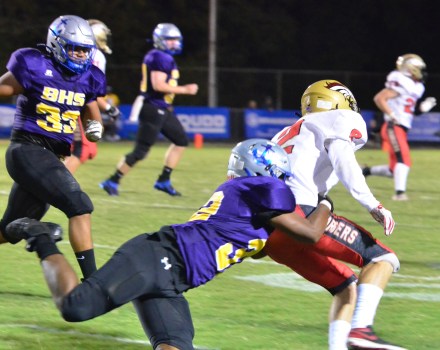 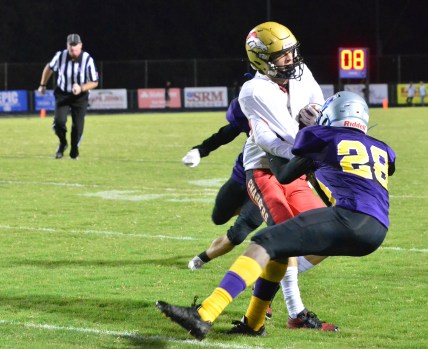 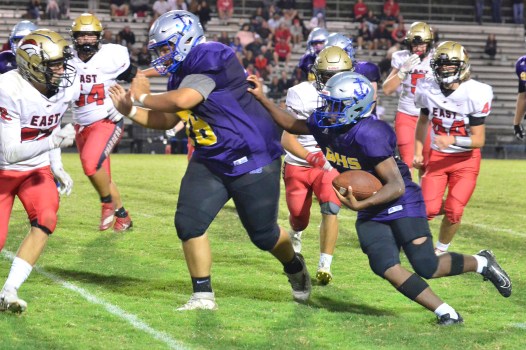 Powerful Class 6A Bullitt East held just a 14-13 advantage over Danville after one period, but exploded for 48 unanswered points the rest of the game and handed the Admirals a 62-13 defeat Friday night at Admiral Stadium.

The Chargers used a quick strike, fast-paced offense to hand the Admirals their first loss of the season on their home field.

The Admirals, however, grabbed a quick 6-0 lead on the first play of the game when senior quarterback Brady Morse connected with Crawford on a perfectly thrown 51-yard touchdown pass just nine seconds into the game.

“We stepped up to Class 6A again and they were a quality opponent,” Danville coach Mark Peach said, “We knew coming in what a chore this was going to be, Just the numbers they have been putting up against everybody tells you the type of program they are.”

The Chargers (5-1), who averaged just over 50 points per game and had one game against Bullitt Central where they scored 76 points, struck quickly after the Danville score.

Nolan Davenport, who had six catches for 92 yards and three touchdowns, was on the receiving end of a 36-yard touchdown pass from Travis Egan to give Bullitt East a 7-6 lead, then the same combination scored on an eight-yard touchdown pass just four minutes later for a 14-6 lead.

Danville (4-3) scored again just before the end of the period to trim the lead to 14-13. Morse connected with Keelan Story for a 39-yard touchdown and Keegyn Wilcher tacked on the extra point, but Bullitt East took charge and dominated the rest of the game.

“(Bullitt East) really hasn’t had any problems moving the ball against anyone they have played,” Peach said. “They have really good pieces (Egan, Davenport, Camron Brogan, and Mason Gauthier) that have all been starting since they were freshmen and now they are juniors and dishing some out themselves. They’re a good football team that has gotten better every year.”

Everything just snowballed after the first quarter on the Admirals. The Chargers scored twice in just 12 seconds on a nine-yard run by Gauthier and a 15-yard interception return by Brogan to make it 28-13. Later in the half Davenport was on the receiving end of a 14-yard touchdown and Bullitt East finished the half with an impressive 93 yard, nine-play drive that ended with a Gauthier nine-yard run and a 41-13 halftime lead.

“I was still proud of the guys for their effort in the first half,” the Danville coach said. “ After Corydon went out, it was just a matter of moving people around with the healthy bodies we had. We got tired defensively. They played with so much tempo and ran and threw to so many people.”

The running clock went into effect after Gauthier’s 39-yard run to begin the third quarter and the Chargers tacked on two late scores to finish the easy win.

“I told our guys after the game that district play starts next week and everybody starts all over,” Peach said. “Destiny is in our own hands beginning next week at Somerset.”