Economic forecast bleak for ag sectors, consumers next in line 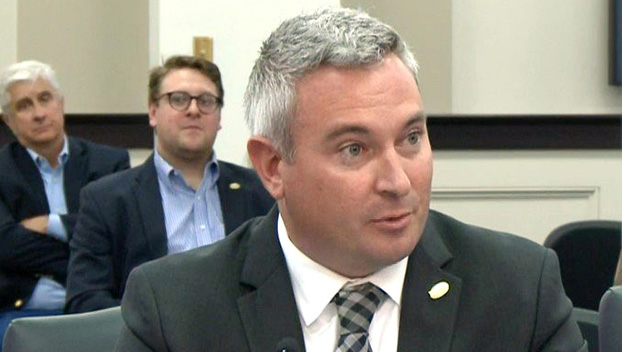 Supply chain issues and inflation brought on by the pandemic are causing problems in a variety of Kentucky’s economic sectors including agriculture, a legislative committee heard in Frankfort on Wednesday.

Kentucky Commissioner of Agriculture Ryan Quarles told the Interim Joint Appropriations and Revenue Committee that supply chain issues are at a critical point.

“Our farmers, in the middle of harvest, are just one worn out part, a broken part, away from being shut down for two or three weeks,” he said. “It’s kind of ironic that a half-million-dollar piece of equipment can be shut down for a $30 part.”

Quarles says this is not just a short-term issue. “We’re starting to see increases in input costs going into the spring of 2022, most notably on fertilizer and parts. We have barges that contain the parts that we need, which are not being unloaded, and of course, if you’re shipping out, there’s a shortage of shipping containers.”

While net farm cash receipts from crops are expected to go up this year, Quarles says that’s not the whole story. “Our feed costs are going up as well, whenever grain costs go up.”

A labor shortage is another big problem for the agriculture industry, according to Quarles. “There are over 10 million jobs available in America right now. It’s hard to attract folks in ag to begin with; it’s hard work and you can’t ‘Zoom’ it in. You have to show up every day despite the weather conditions, and it’s really becoming an issue.”  There are other shortages affecting agriculture, Quarles stated. “In the dairy industry, you’re seeing various types of containers, because they are having a hard time finding plastic bottles. Our friends in the bourbon industry are having trouble finding glass bottles to put bourbon into right now. There are no shipments of bourbon going to some states because you can’t find the glass to bottle it.”

Tom Underwood, executive director of the Kentucky Wholesale Distributors Association, said shortages also exist for a number of products at the wholesale level. As a result, he suggested that anyone shopping for Christmas should do it now, to avoid being shut out.