Scarlet Cup Theater returns to the stage with ‘Distant Music’ 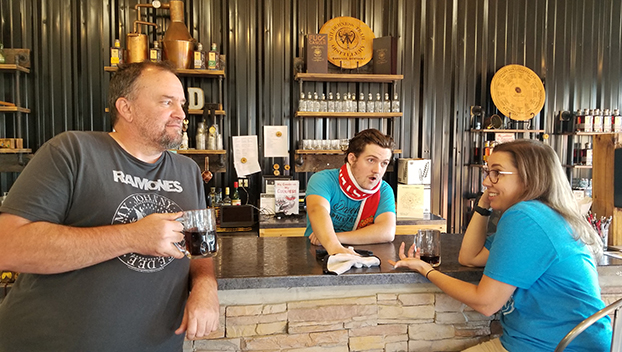 After a year long break, Scarlet Cup Theater returns to the local scene with Distant Music by James McLindon.  Continuing the theater’s philosophy of presenting new works staged in unusual venues, this show will be presented in the visitors center of the Wilderness Trail Distillery.  The venue is perfectly matched to support the theme of the play, as the setting is an Irish bar in Boston.

When Liz Orndorff, president and founder of Scarlet Cup Theater, first read Distant Music she knew it would be a hit and contacted the playwright.  Their conversation convinced her the play would be a great addition to the Scarlet Cup calendar and just needed a venue.  Calls to Wilderness Trail Distillery staff cemented the deal.

Orndorff, also director of the production, described the play as a wonderful examination of the way we live; delving into our relationships with each other, our faith, and our purpose.  She described it as a fresh and funny approach to some of the most basic issues we face.

“The cast is superb,” she said, also noting that it is the first time Scarlet Cup has selected all local talent to fill the roles.  “Covid actually presented us with a unique opportunity to consider our own excellent resources.  We wanted to have everyone close to home and we couldn’t be happier with the results.”

Julie Taylor plays Maeve with Chuck Taylor portraying Conner.  Maeve and Connor, friends since college, each face a major life decision at a critical point in their lives.  While spending time at the local bar just after the New Year, they contemplate their relationship, and their futures, with the assistance of Dev, the Irish bartender, played by Elijah Brown.

The three cast members are not strangers to local theater goers, having worked together several times since 2014.  Julie Taylor was very pleased to be cast as Maeve.  She particularly enjoys roles which present some depth and are thought provoking, with a light hearted touch.  Chuck Taylor commented he has enjoyed developing his character, Connor, who questions the relationship between his faith, his personal choices, and his professional career.

The small cast presents the characters with the opportunity to interact in unique and significant dialogue.  Having performed in several large cast productions, Elijah Brown welcomed the role of Dev, the bartender.  Previous work with the Irish performers from Carrickfergus, provided experience for his authentic Irish accent.

Scarlet Cup theater is pleased to be hosted by the Wilderness Trail Distillery for this very special theater experience.  The Danville Sister Cities Commission is partnering with the Theater to further Sister Cities’ mission of supporting entertaining cultural events in the Danville community.

Distant Music opens Oct. 28 for a two-weekend run.  Shows Thursday through Saturday will be at 7 p.m. and Sunday matinees are at 3 p.m.  The Distillery opens one hour before each performance for seating.  The Distillery has developed a special menu of Irish themed drinks and soft drinks for sale.  Tickets for the show are available on-line at danvillearts.org.