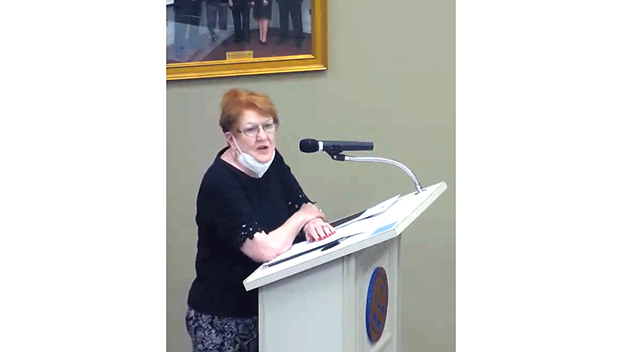 Gail Louis, chairperson of the Danville Cemetery Committee, announced her resignation from her position, effective immediately, on Monday evening during a City Commission meeting. Another member of the cemetery committee resigned as well.

Louis’ announcement came after the commission on Sept. 27 took back its decision to match cemetery rules and regulations to an existing city ordinance which rules that dogs are not permitted in city cemeteries. The recommendation to have cemetery rules and regulations reflect what the ordinance states came from the cemetery committee. At first, on Aug. 23, the commission voted to not permit dogs and to go along with recommendations, then took back their decision on Sept. 27 after reconsideration.

Thus, the steps that were planned to take place at Monday’s meeting were to have a first reading of an ordinance revising the prohibition of dogs in cemeteries, then a first reading of an ordinance allowing codes enforcement officers to issue citations should they witness any kind of violation, including violations of dog leash and waste laws, which would be handled as civil, not criminal cases, and then the commission planned to amend cemetery rules and regulations to change back to allowing leashed dogs, to reverse their decision to not allow dogs.

However, concerns from Louis and two other members of the cemetery committee, which they presented to the commission during a public comment portion of Monday’s meeting, led the commission to table reading the ordinance revising the prohibition of cemeteries and amending the cemetery rules and regulations. The first reading of the code enforcement fine schedule amendment, on the other hand, was approved unanimously and applies to all violations taking place in city cemeteries, not just violations involving dogs.

City Manager Earl Coffey said this decision is meant to help take some of the burden off of police officers by having codes enforcement officers handle violations instead. He said there has been past confusion among codes enforcement officers about what to do about dogs in cemeteries because there have been conflicting texts: the ordinance prohibiting them and the cemetery rules and regulations allowing them as long as they are leashed and their waste is cleaned up.

City Attorney Stephen Dexter outlined what the fine schedule would be for violations in city cemeteries: for violations not contested, an $100 fine for the first offense, $200 for the second and $400 for subsequent offenses. If contested before a hearing in Boyle County district court, fines are increased by $50 in each category.

Louis said the city has issues at Bellevue Cemetery, also known as Danville Cemetery, with dogs and people using the cemetery as “a recreation facility, an athletic training ground, an outdoor theater or a place to sunbathe.” She said the problems do not exist to the same extent at Hilldale Cemetery.

She said there have been several repeated instances of people coming into the cemetery with their dogs and letting them “run wild.”

She called Danville the “city of lasts” when it comes to taking care of city cemeteries. She said it took her about 17 years of “begging” to get the commission to agree to put shelters in cemeteries, and about 11 to get cemetery streets paved. She said she thinks the cemeteries are forgotten and ignored by the city.

“I really, really care about our cemeteries,” she said. “I’ve done all I can to make them better places, more beautiful places, and more meaningful places. But I’m really tired of arguing and begging for your crumbs. And so I quit. You can consider this my resignation, effective immediately.”

Larry McGee resigned from the committee as well, saying he thought the commission made a mistake with their previous decision.

Committee member Ruth Ryan said she has seen the same issues in the cemeteries as Louis has, and, “It breaks my heart to see it, with our loved ones buried there.”

“With the trends that we’ve seen around Kentucky and around the United States and somewhere around the world, you can see a trend that for right now, we do have a downward trend going,” he said. “That’s a positive thing.”

However, he said it’s difficult to know if that’s the way the situation will stay.

“With the variants on this, you can probably expect there will be another version of a variant at some point, and we’ll deal with it and we’ll go up and down, and that might be how we look at this for a little while,” he said.

The vaccination rate in the county has increased, he said. It’s around 62%.

• As an Economic Development Authority joint appointment between the city and county, the commission approved the selection of John Roush as chair of the EDA. He is the previous, retired president of Centre College. This decision is awaiting approval from the Boyle County Fiscal Court, as it is a joint appointment.

• The commission unanimously approved the creation of a Martin Luther King, Jr. celebration committee, which will plan events for MLK Day. Members of the committee will be appointed after creation of the ordinance forming the committee. The plan is to have proposed appointments and terms on the next city commission agenda.