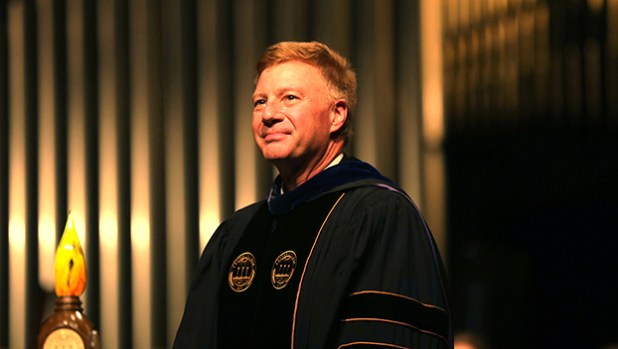 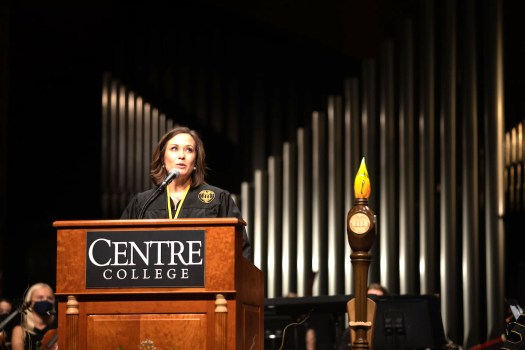 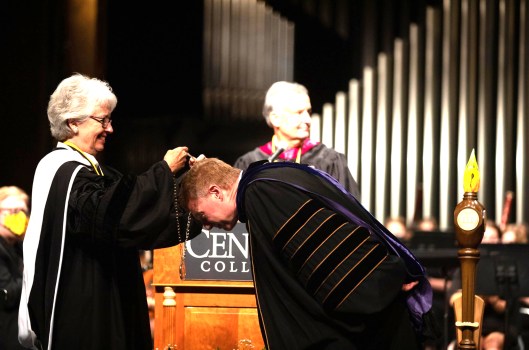 Crit Luallen, class of 1974, bestows President Milton C. Moreland with a medallion during the inauguration ceremony. - Photo from Centre College

Milton C. Moreland was inaugurated as the 21st president of Centre College on Oct. 14 in an afternoon event held in Newlin Hall of the Norton Center for the Arts that focused on the theme, “Building a Community of Inclusive Excellence.”

The much-anticipated ceremony to install President Moreland, who took office on July 1, 2020, had been postponed due to safety issues surrounding COVID-19 until the college deemed that an in-person event could take place without risk to anyone’s health.

More than 1,200 guests were in attendance, including 100 alumni representatives and institutional delegates from colleges and universities across the country, who joined with trustees and campus community members.

In his inaugural address, Moreland stated, “Our community flourishes when we are agile, open to new ideas, engage with people who have different identities and pursue our curiosities. That is Centre’s foundation for building an inclusive community.”

Looking ahead to the aspirations he hopes to achieve during his tenure, Moreland focused on a number of initiatives intended to build on the College’s existing strengths.

“Driven by our belief that the freedom and open exchange of ideas promotes a more just and inclusive society,” he said, “we will expand opportunities at this college for all of our students to be involved in applying their knowledge through experiential learning, community engagement, internships, and living and working in even more study abroad and study away locations as they prepare for their future careers.”

This unique and impactful form of living and learning will have a clear outcome, he said.

“Centre will be increasingly known for our experiential learning and co-curricular programming that provides a global perspective, enhances our students’ communications skills, refines their leadership abilities, and prepares them for a lifetime of meaningful work and civic impact.”

A new vision for a new era

Mark Nunnelly class of 1980, chair of the Centre College Board of Trustees, presided over the ceremony that included Kentucky Lt. Gov. Jacqueline Coleman, who is from class of 2004, and Dr. Marjorie Hass, president of the Council of Independent Colleges.

“This day of celebration is an opportunity to mark a new vision for a new era,” said Student Government Association President Sarah Ali, class of 2022, in her opening invocation. She also offered a prayer that Moreland and his wife, Dina, would “foster a commitment to intercultural sensitivity and equity, to academic excellence and to civic empowerment.”

In his welcoming remarks, Nunnelly told the audience that “Milton Moreland is the right person at the right time to lead this great institution that has grown from strength to strength since its founding in 1819.”

In addition to complementing Moreland for guiding the college through the COVID-19 pandemic “by modelling the grace and kindness that is the hallmark of this caring and compassionate community,” Nunnelly also described how he has looked to the future.

“Rather than finding ourselves paralyzed by the grip of current challenges,” Nunnelly said, “I am immensely proud of the way Centre College has not merely managed to endure during the global pandemic but how it has thrived and positioned itself to be even stronger once we emerge from this extraordinary period.”

He listed numerous accomplishments that have already occurred in Moreland’s first 15 months in office. These include programmatic additions to expand academic offerings and impressive and strategic capital projects, all supporting educational excellence. And “more are on the way,” Nunnelly added.

On the inauguration theme, Nunnelly closed his remarks emphasizing that “by embracing inclusive excellence, we aspire to assure our ability to support faculty, staff and students from diverse backgrounds by fostering a genuine sense of belonging as the foundation for an innovative and dynamic campus community that encourages excellence in all forms.”

Nunnelly then introduced Coleman, who brought commendations from the Governor’s Office on behalf of Gov. Andy Beshear and spoke about her experiences as a Centre student and graduate.

“Many of the values that have come to define me were cultivated right here at Centre. Hard work, resilience, rising to meet the moment and learning to see the world through the eyes of others,” she said.

“When I came to Centre and was exposed to a diversity of experience and thought that was different than my own,” Coleman added, “I became a better student, a more informed citizen and a more mindful leader.”

She closed with a challenge.

“Now, more than ever, our world needs thoughtful and creative leaders who can build bridges of understanding, lead through change and address the challenges of a complex world — and who do so with empathy and compassion.”

Marjorie Hass, who previously served as president of Rhodes College when Moreland served as provost, complimented Centre as a place that focuses on the “education of the spirit.”

She described its “real curriculum” as being about “helping each student come to see that their insights and actions matter. It is about cultivating habits of the mind, such as humility, consistency, compassion and respect. It is about coming to love justice and the search for truth, to hold high the value of each human life and to know oneself deeply.”

Reflecting on their years working together, Hass added, “As a leader, Milton has a special gift for keen-eyed clarity and an ability to look challenges squarely in the eye. Yet he remains a boundless source of optimism and energy. Over and over again, I witnessed his creative and compassionate problem solving — I often describe him as Solomon-like for the way he spots hinge points that motivate people to find common ground and row in the same direction.”

The investiture that followed Hass’s remarks involved former Kentucky Lt. Gov. Crit Luallen, a 1974 alumna of Centre College, who serves as secretary of the Board of Trustees and bestowed the presidential medallion. Then Moreland gave his inaugural remarks.

Faculty President John Wilson offered a response after Moreland’s address, and the program closed with a benediction delivered by College Chaplain Rick Axtell, who expressed gratitude to the Morelands for their “steady stewardship in an era of contagion and contention, deception and dissension,” praying that “they lead with an ethic of empathy and equity.”

Following the ceremony’s conclusion, guests joined Moreland, his wife, Dina, their two sons, Marcus and Micah, and their daughter-in-law, Caroline, for a reception in their honor on the lawn in front of the Norton Center for the Arts.