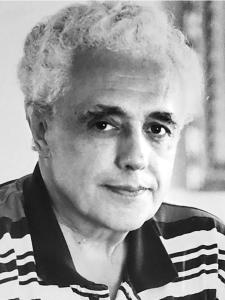 Charles “Chuck” Girard passed away on October 15, 2021 at Thompson Hood Veterans Center in Willmore, KY. He was born on January 11, 1932 in North Adams, MA to Arthur Alfred and Bertha Viola Dudley Girard.
Chuck graduated from Drury High School in 1950 and enlisted in the U.S. Army the next year. He was stationed in Austria and served until 1954. He received his B.S. and M.S. in Chemistry from Ohio State University. He received his PhD. from the University of Kentucky. It was at UK that he met his wife, Annabel Sisk Girard. They were married on December 21, 1969 and built their family in Danville, KY. In 1968 he began working for Centre College teaching theoretical chemistry. He went on to teach there until his retirement in 1995, at which time, he was made professor emeritus. Known on campus for his cigar and sense of humor, former student Dr. Jeff Fieberg, said, “Dr. Girard had a look—He always wore sweaters, had a cigar, and wore a face shield in lab. He was known for saying, ‘If you spill acid on your sweater, you’ll be more holey than righteous!'”
In addition to his work at Centre, he was an avid supporter of the Boy Scouts and was affiliated with Troop 119 in Danville, KY. He was a member of the Order of the Arrow and in 1989 received the St. George Medal, presented by the Catholic Church to outstanding Scout leaders. He served on the Bluegrass Council for six years. He was awarded the “Silver Beaver” and the District Commissioner of the Year awards in 1990.
His work with the Church included serving on Sts. Peter and Paul’s parish council, religious education committee, and as coordinator of adult religious education. In 1998 he received the “Knight of the year” award from the Knights of Columbus. Other volunteer activities included working with the Central Kentucky Cancer Program to sit with people as they received chemotherapy. As a cancer survivor himself, he wanted to support others.
He enjoyed many hobbies including: ham radio operation, tropical plant and orchid cultivation, building and playing a pipe organ, cooking, model building, and painting – to name a few. He was a member of the Gathering Artists.
He is preceded in death by his parents and his sister Lorraine Anne Girard. He is survived by his wife; his brother, Arthur (Lissie) Girard of Richmond, VA; his son Charles Dudley (Stella) Girard; his daughter Mary Ashby (Jerry Adkins) Girard; and two grandchildren, Veronica Annabel Girard and Arturo Constantine Borges.
Walden Funeral Home of Perryville, KY is handling the arrangements.
In lieu of flowers, the family requests memorials be sent to:Sts. Peter & Paul Church (make checks out to church) Attn: Steve Ellis Troop 119 117 West Main Street Danville, KY 40422 Or Thompson Hood Veterans Center 100 Veterans Dr. Wilmore, KY 40390