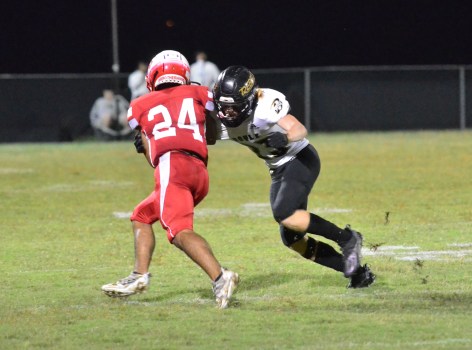 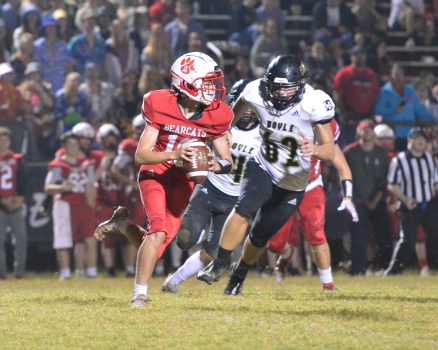 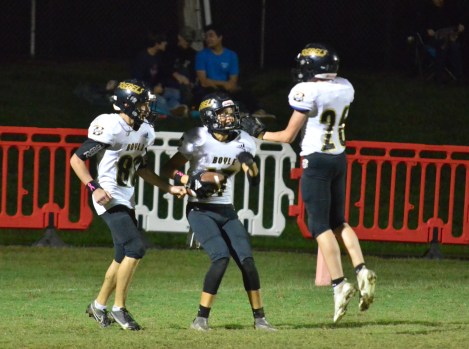 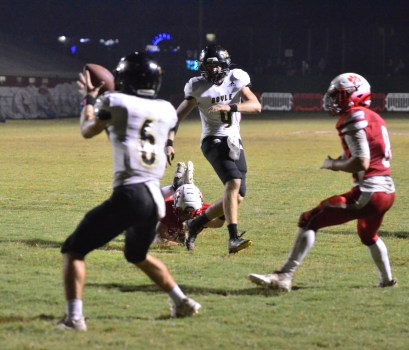 Jagger Gillis (9) throws a shovel pass to Boyle County teammate Cole Lanter (6) for a touchdown during the second quarter Friday. It was one of five touchdown passes for Gillis and one of three TD catches for Lanter. - Photo by Mike Marsee 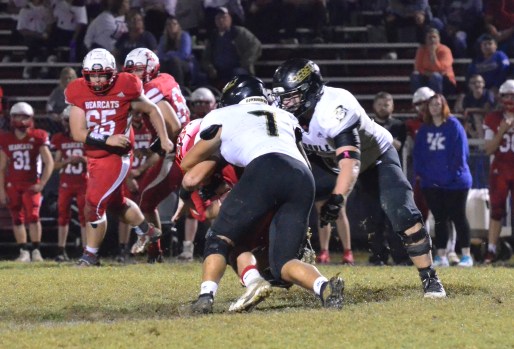 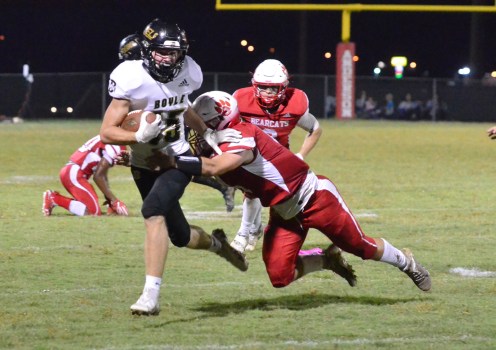 Keenan Stewart, left, of Boyle County tries to shake off a tackle by Anderson County’s Hudson Uebel during the first quarter Friday. - Photo by Mike Marsee

LAWRENCEBURG — Jagger Gillis already had a wealth of memories of playing and watching football at Bob Ware Field, and now he has one more.

Gillis, the Boyle County quarterback who played the first three years of his high school career at Anderson County and watched countless games there as a youngster, enjoyed one of his best games at Boyle in his return to that familiar field Friday night.

He threw five touchdown passes in just two periods to help Boyle make quick work of Anderson in a 56-0 romp.

“All week we were just trying to focus on our game, playing our ball each week, and that’s what we did tonight,” Gillis said. “I’m happy to come back out here in my hometown and play on this field. I played a lot of games on this field, and it feels good to come back one more time and to get a win.”

Boyle coach Justin Haddix said Gillis did a lot without doing too much in a game some players might have been tempted to try to take over.

“I was proud of him,” Haddix said. “He came out and set a precedent, and he just did what he was coached to do. A lot of times you get (players) in an environment (like this) and they start trying to do their own thing, and I feel like he was a great example of playing within himself, doing what he does good and letting guys make plays for him. He had a great game.”

Haddix said it was also a good game for Boyle as a whole as it tried to maintain a high level of play against the team with the lowest RPI rating of any of its regular-season opponents.

Seven of the 17 offensive plays Boyle (7-1, 2-0 District 4A-5) ran in the first half resulted in touchdowns as the Rebels scored every time they possessed the ball in the first two periods.

Meanwhile, Anderson (2-6, 0-2) netted minus-14 yards in the first half and 44 yards overall against the Rebels’ defense.

“Championship teams play that way all the time. There’s no letdown,” Haddix said. “I feel like our team from the very first whistle — obviously, we had a few little things early, a few silly penalties, but after we got that fixed, I felt like our group came out and played the way they needed to play.”

Gillis, a fifth-year senior, played against Anderson in 2020, but this was his first game at Anderson since he transferred to Boyle, and he said it felt a little unusual to be on the visitors’ sideline.

“It was weird at first,” he said. “A little emotion went into it, because I do love this place, it’s my hometown. And coming back here, seeing this field one more time, it’s amazing.”

Some of Gillis’ earliest memories of watching games at Anderson include Jacob Russell, the Bearcats’ quarterback in the late 2000s who later tutored Gillis on playing the position.

“He’s probably the greatest player to ever come through here, in my opinion,” Gillis said. “Growing up, I always wanted to be like him, but he probably doesn’t know that. He was just one of the role models for me.”

Gillis’ first game as a starter for Anderson was a memorable one. He got the nod three games into his freshman year for the Bearcats’ 2017 home opener against a Mercer County team quarterbacked by his older brother, Gunnar. And while the older brother had better numbers, the younger brother got the “W,” 21-19.

“My first game on this field I beat my own brother. That was a memory I’ll remember for the rest of my life, and now to come out here the last time and get a win,” Gillis said.

This was one of Gillis’ best games in a Boyle uniform, and he only played half of it before the reserves took the field for the third quarter.

He threw the ball on 15 of Boyle’s 17 offensive plays in the first half, completing 11 passes for 249 yards and throwing for five touchdowns for the second time in 17 games with the Rebels.

Cole Lanter, Gillis’ favorite target, caught three TD passes, including plays of 50 and 43 yards in the first quarter, and had a total of five receptions for 118 yards.

“We always have a great connection, and I love throwing it to him. When he scores, we get so hype,” Gillis said.

Luke Imfeld, who is better known for basketball but joined the football team for the first time for his senior season, caught a 41-yard TD from Gillis for a score on the second play of the second quarter.

“I’ve been looking for it for a little bit and looking to make that connection with Jagger,” Imfeld said. “I came close to one against Bowling Green, but I wasn’t able to stay inbounds after catching it.”

Gillis said the play that put Imfeld in the end zone was one that stood out for him.

“Seeing Luke Imfeld get his first touchdown in high school, that’s a moment I’ll remember forever, and I’m so happy for him,” he said.

Imfeld is expected to be one of the top basketball players in the 12th Region this season, and he said he’s enjoying his newest sport as well.

“I love both sports, so just call me an athlete,” he said.

Junior Jakei Tarter got his first TD on the final play of the first half, when he caught a 16-yard throw over the middle to send the Rebels to the locker room with a 48-0 lead.

“All week we tried to get Jakei the ball, we tried to get him in position,” Gillis said. “The last play, I audibled the route. I said, ‘Run this! Run this!’ and it worked out, we scored.”

Lyndon Smith, a freshman, capped the scoring for Boyle in the closing minutes when he caught a pass over the middle from classmate Riley Preston and broke free for a 74-yard scoring play.

Time to shine: Boyle’s junior varsity players got as much varsity playing time as they had in any game this season, spending the entire second half on the field, albeit in a running-clock scenario.

Haddix said he was happy to see players such as Smith, Preston and Blakemore get their moment of glory and to see the enthusiasm within the second unit.

“You saw the excitement, and that’s what I enjoy seeing,” Haddix said. “They’re working, they’re practicing just like everybody else and putting the time in. They get to play on Monday nights and some on Thursdays, but there’s nothing like those Friday night lights.”

Gillis said he and his fellow starters enjoyed watching them from the sideline.

“We have so much fun in practice, and seeing them come out here in games and making plays, it’s awesome, and I’m happy to see them succeed as well,” he said.

Playoff preview: Boyle has beaten Anderson four times over the past three seasons by a combined score of 226-21, and there likely will be another meeting next month.

The teams are expected to face off in the first round of the Class 4A playoffs under the intradistrict format that has been used for the first two rounds of the postseason since 2019 and will continue to be used through 2022.

They did so in 2019 and would have played a second time last year, but the first-round playoff game was canceled by Anderson due to issues related to COVID-19.

Extra points: Avery Bodner carried the ball on the only two non-passing plays the Rebels ran in the first half, and he scored on both of them. His touchdown runs of 3 and 11 yards gave him six rushing touchdowns on the season. … Boyle had 371 yards on offense but got only 42 of them on the ground on 11 rushing plays. … Jake Alexander recovered a fumble for Boyle in the second quarter. There were seven fumbles in the game, and each team lost one.

Week nine: Boyle will try to secure a No. 1 seed for the postseason as it returns home this Friday to face Bourbon County.

Bourbon (4-1, 1-1) is decidedly better than the team that went 1-6 last year and lost 41-0 to Boyle and 52-0 to Lexington Catholic in district play. Last week, the Colonels scored five touchdowns against LexCath in a 48-35 defeat.

Bourbon’s ledger includes a 43-14 victory over Anderson as well as wins over East Jessamine, Harrison County and Knox Central.

“Bourbon’s got some athletes,” Haddix said. “It’s going to be a little more of a test, and we’re going to have to come out and have a good week of practice.”

Jayden Moody, a junior, rushed for 181 yards and three TDs against LexCath. He and his brother, junior Josh, transferred from Man (W.Va.) this year and have combined to rush for 532 yards and eight touchdowns.

Junior quarterback Clay Estes, a three-year starter, has thrown for 928 yards and rushed for 222 yards.