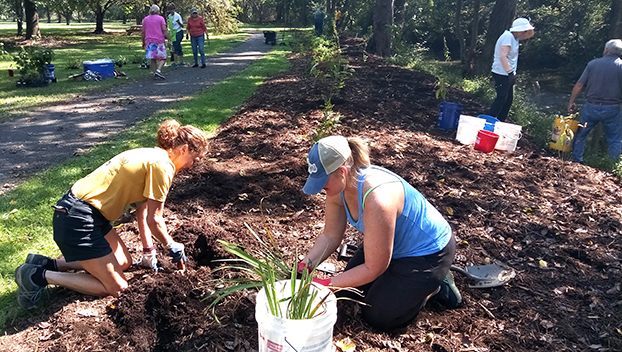 On a beautiful fall afternoon, a small army of volunteers from multiple civic organizations gathered along Clark’s Run at Michel E. Smith Park to help restore the creek bank. With shovels, trowels and buckets of water scooped from the creek, they planted over 80 native trees, shrubs and perennials purchased from nurseries specializing in plants native to Kentucky.

The streamside restoration project has been underway along Clark’s Run for several years. The project is being directed by Clark’s Run Educational and Environmental Corporation with grants and volunteer help from groups both local and regional.

Volunteers spent days clearing invasive bush honeysuckle and other non-native plants from the creek banks. Dr. Preston Miles, chairperson of CREEC explained that trees, shrubs and smaller plants are necessary to stabilize the bank and shade the water.