A matter of tenths for the Boyle County Marching Band 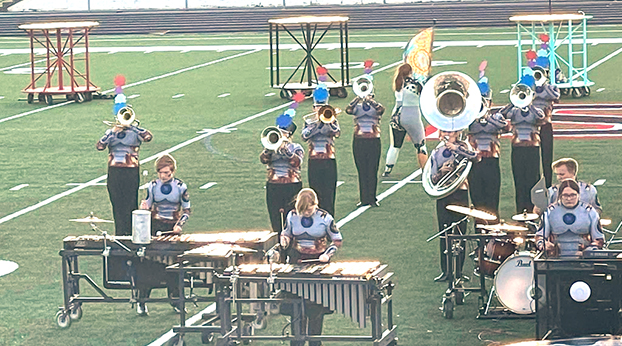 This past Saturday, the Marching Rebels participated in their last local competition of the season.

Facing two very close rivals in Class 3A, the Rebel challengers were Garrard County and Madison Southern who both brought fierce competition to the field.

After the performance, many of the Marching Rebels had mixed feelings about their time in front of the judges. While many band members mutually agreed that it was a good show, they said it could have been better. The color guard, however, put on an amazing performance and they felt good about their chances.

During the competition’s award ceremony, the Marching Rebels would win 3rd place overall with a distinguished rating. In Class 3A competition, Boyle took home a third-place trophy while winning Best Color Guard overall. The difference between 3rd and 1st place was less than a point.

While many were disappointed by the outcome of the competition, The Marching Rebels understood they had to work really hard this week to ultimately place at quarter-finals next Saturday.

Band Director Zack Shelton knows his group will rise to the challenge and be ready for the preliminary state competition by the end of this week. “We performed well last week, but knowing that the competition is fierce this upcoming weekend, we are working really hard to finalize and improve all the little details to take the Rebels to the next level!”

The Marching Rebels will be competing this Saturday at Madison Southern High School for regionals and an opportunity to perform in a few weeks at Kroger Field.