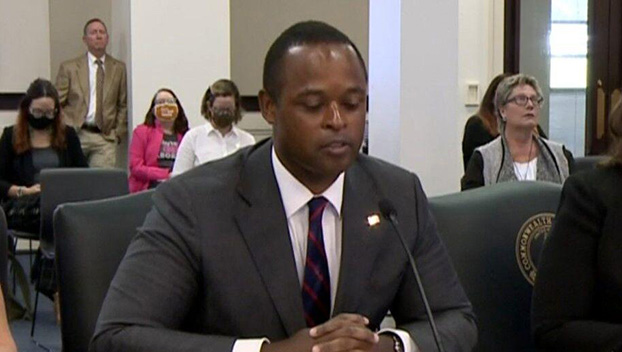 FRANKFORT, Ky. (KT) – Attorney General Daniel Cameron described human trafficking as “a sinister crime that exploits others for sex or labor” during his testimony before a legislative panel on Wednesday.

At an appearance before the Interim Joint Veterans, Military Affairs, and Public Protection Committee, Cameron said it endangers the welfare of our most vulnerable.  “Victims of human trafficking can be adults and children of all races, genders, ages, and backgrounds.  This often makes it difficult for our fellow Kentuckians in law enforcement to identify those who are being trafficked.”

In addition, Cameron testified, “During the 2020 reporting period, the Kentucky Cabinet for Health and Family Services reported 206 instances of human trafficking against minors.  We cannot allow this to continue.”

He said there has been help from lawmakers, including provisions of a bill passed this year which closed a loophole in the sex offender registry, which previously did not require registration of those who trafficked adult victims.  It also broadened the definition of commercial sexual activity, to include trading drugs for sex.

Cameron called the changes important, because human trafficking can take many different forms.  “For example, here in the commonwealth, there is a strong relationship between the drug epidemic and human trafficking.  Time and again we see human trafficking cases involving a family member or acquaintance who traffics a child in exchange for drugs or drug money.”

He also described some of his office’s recent success stories, such as Operation United Front, which took place in August and involved 12 states and 29 law enforcement agencies.  “In Kentucky, law enforcement partners made over 45 arrests and assisted 21 victims of human trafficking, two of them minors.”

Rep. John Blanton, R-Salyersville, a retired Kentucky State Police Major, told Cameron he is supportive of any legislation that combats human trafficking, “Because it is a problem that we are faced with, and we can no longer sit back and deny its existence.”

He added, however, “We can pass all kinds of legislation, but without support and funding for the people out here doing the work to ensure that we’re getting these people off our streets, the legislation is useless.”

Library hosts an outdoor storywalk, chess in the park,…