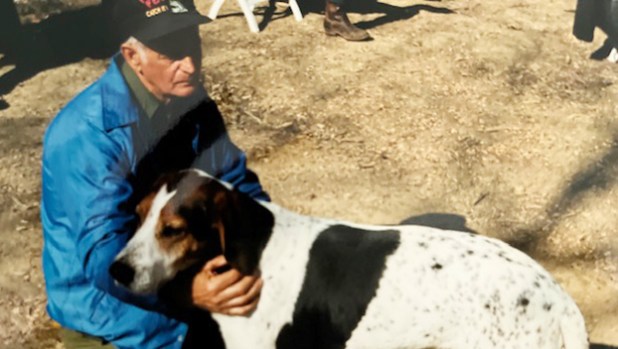 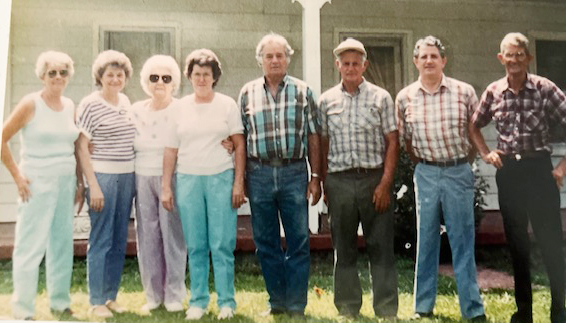 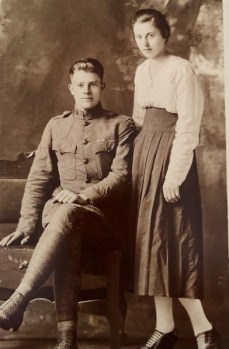 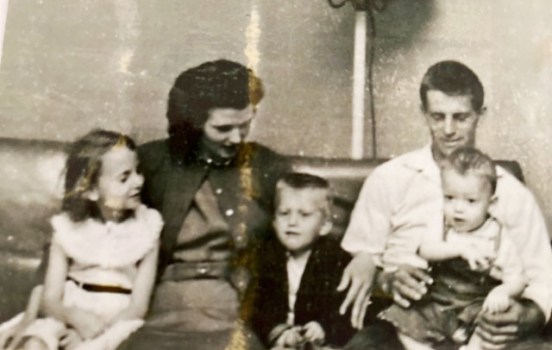 Jesse and Eva Wilson and their three children, from left, Melissa, Gary and Lonnie

Jesse Wilson has spent most of his 91 years in western Boyle County where he was born and raised.

He has been a hard worker and spent much of his free time coon hunting in the knobs.

While Jesse is not famous, one of his coon dogs, ‘Speck”, gained fame after appearing in a movie filmed in the Forkland community.

“I was contacted by Robbie Henson, who was filming the movie on Carpenter’s Creek,” Jesse said. “He wanted to use my dog in the movie.

“I let him use the dog, but I stayed with “Speck” and brought him home after each filming.”

Jesse remembers his dogs chasing coons all over the Forkland woodlands and he had to chase after them. He doesn’t have any trouble keeping up with his dogs now.

Jesse has a good memory as he talks about his life on the farm in southwestern Boyle County as if it was a few years ago, however, that’s not the case for this 91-year-old who keeps active chopping wood for the winter, making crafts and talking fondly about his family. He also likes to fish.

He shared some of these memories of growing up in a family of a dozen children and family who kept adding rooms as the family grew.

“I was born in this house,” he said of the small frame house where nine of his 12 brothers and sisters were born, including siblings, Raymond, James Rex, Bobby, and Herbert, and six sisters, Eula, Betty, Mary, Alma, Ann and Minnie.

George operated a sawmill and farmed.

George and Margaret moved their family to Kentucky while his son Martin was in the Army during World War I.

Martin made his first trip to Kentucky after he was wounded in the knee during the war. He and Eva Reed, a neighbor of the Wilsons, who lived across the creek, were married.

Jesse recalls when his parents talked about the way they met. Eva first saw Martin, she said, “That’s going to be my husband if I can get him.” She got him and after a courtship, they were married and had nine children: Betty, Mary, Eula, Ann, Raymond, Jesse, James Rex, Bob, and Alfred.

Jesse remembers his dad always dressed up when he went to American Legion Post meetings and other places.

Jesse’s wife, Ella Mae, did not live close to the Wilsons and he had to walk five miles to see her.

“I remember when the creek flooded and we had to walk up a hill to get to school. When Jesse and Ella Mae started courting, he had to walk to see her.

“I walked five miles to Peckerwood Grocery in Junction City to court Ella Mae before we were married. “I’d walk further than that if I had her back.”

They got married June 10, 1950, and lived in the house he built and he still lives there.

“We were married 65 years. She was a good wife and mother.”

Jesse appears to be a jack-of-all trades.

Besides driving a school bus, he worked on road construction for 40 years, and snaked logs out of the woodlands for Morris Martin, who operates a sawmill.

He especially likes to work with wood and has built numerous crafts. He built 50 sets of cabinets, made with wood out of the surrounding hills, for his neighbors.

He built 35 small decorative wishing wells from patterns he drew. He also built a curio cabinet for his wife.

Jesse keeps busy making crafts after years of working with timber and wood.

He also raises a garden and cooks, and cuts wood for heating a stove.