Up to speed?
Kentucky among top states for increased internet speed 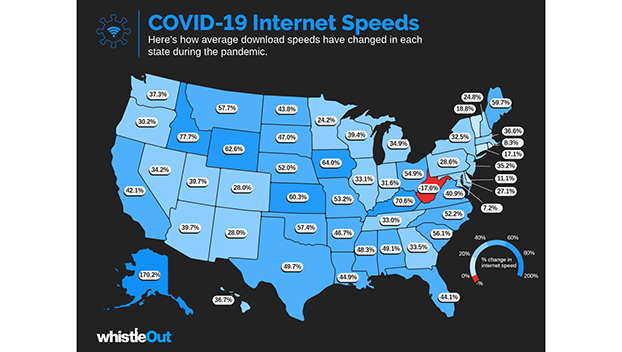 FRANKFORT, Ky. (KT) – The state of Kentucky’s efforts to improve broadband internet service appear to have paid off, as Kentucky is one of the top states for an increase in internet speed since the start of the COVID-19 pandemic, according to a website that monitors the telecommunications landscape.

WhistleOut reported on Wednesday that internet download speeds in Kentucky have increased 71%, ranking the state third in the nation, only behind Alaska (171%) and Idaho (78%).

This was the second year in a row that Kentucky ranked third for internet speed increases throughout the United States.  In 2020, download speeds in Kentucky rose 37%, following Wyoming at 52% and Alaska at 40%, compared to the previous year.

On the other end of the scale, West Virginia was the only state to see a decrease in internet speed, down 17.6%.  Overall, the U. S. saw an average 40% jump in internet download speed since the start of the pandemic, according to WhistleOut.

Since the COVID-19 pandemic began, the state has invested hundreds of millions of dollars and continues to do so, to improve broadband internet speed and access across Kentucky.

In August 2020, Gov. Andy Beshear dedicated $8 million in CARES Act funding to expand internet connectivity for elementary and secondary students and their families.

Through a bipartisan agreement with state lawmakers signed into law by the Governor earlier this year, Kentucky’s Broadband Deployment Fund will assist private sector entities and governmental agencies in the cost of constructing the “last mile” of high-speed internet access to unserved and underserved households and businesses across Kentucky.

The fund includes $300 million earmarked to address the connectivity needs of these communities, including $250 million for the construction of high-speed internet infrastructure to connect unserved and underserved areas – no more than $50 million of which may be awarded before April 1, 2022 – and $50 million for economic development opportunities.

Combined with at least 50% required matching federal investments, a minimum of $600 million will support high-speed internet expansion in Kentucky, creating more than 10,000 direct and indirect jobs.

Coupled with the broadband speed test, access mapping and the KentuckyWired project, Kentucky has the potential to move to the forefront of broadband expansion nationwide, the Beshear Administration says.

WhistleOut is a search engine designed to take the effort out of finding the services you need to connect with the world. Find out more at https://www.whistleout.com/